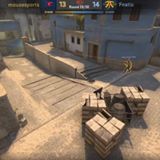 Mousesports (abbreviated as mouz) is the most successful German esport club and one of the most storied professional gaming teams worldwide. Every member lives and breathes eSports everyday, as they compete in the most prestigious tournaments all over the world. Mousesports fields teams in many different games.

Mousesports was formed in 2002 in Berlin, Germany as a Counter-Strike team. The team began to compete in small tournaments, which gradually lead to their progression in larger ones, as well. By 2006, when G7 Teams was created, Mousesports was one of the greatest gaming organizations in Europe.