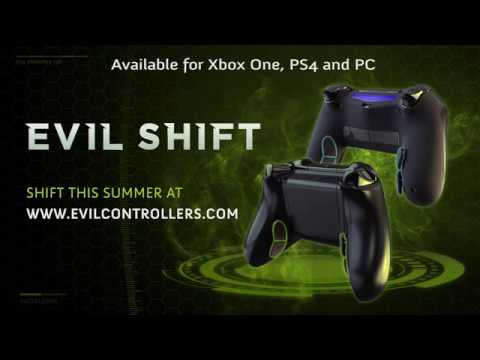 Evil Controllers™ wowed the gaming community in June with the announcement of the Evil Shift™, a customizable controller optimized for competitive esports gamers, giving the edge of being faster, lighter and the easiest to remap buttons and paddles. The Evil Shift will sell for an MSRP of $169.99, and will begin shipping November 9, 2017, just in time for gamers to enjoy with their new Xbox One X, and playable with Xbox One, the PlayStation®4 system and PC.

Evil Shift is tournament-ready, with paddles that are unmatched:

The Evil Shift has the best trigger sensitivity in the industry with significant resistance reduction. Hairpin triggers reduce the tension of the trigger by over fifty percent, allowing for full range of motion without limiting the controller’s capability. Evil Shift adapts to competitive and pro esports gamers’ needs, with the choice of three interchangeable thumbstick sizes allowing gamers to swap sticks on the fly (use taller sticks for trickier sniper shots, or shorter sticks for tight angles or slower motions). Rewriting or reassigning button profiles is simplified, quickly done within seconds allowing quick recall. And, gamers can save more active profiles on the Evil Shift than any other eSports controller on the market.