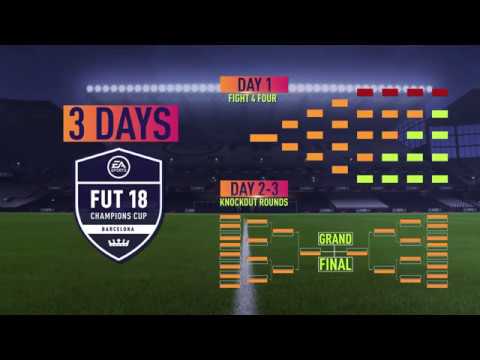 After a compelling month of qualification during the February Weekend League, the top 128 FUT Champions competitors (split evenly between PlayStation®4 and Xbox One) will kick off the three-day FUT Champions Cup in Manchester from April 13 to 15, 2018.  See the tournament overview for full event details and more.

The format for this tournament is the same as that of the Barcelona FUT Champions Cup, including the new Swiss-style format for the group stage.

Each match will consist of two games between the same opponents. The winner will be determined by the aggregate score.

Throughout every stage of the tournament, including the Grand Final, if a match remains tied in aggregate score after the second game, there will be Extra Time and, if needed, penalties will decide the winner.

The Swiss-style group stage format is played according to the following guidelines:

The final stage of the FUT Champions Cup is the Grand Final, a two-game round between the winners of the PlayStation 4 Division and the Xbox One Division. One game is played on each console, and the player with the highest aggregate score after the two games wins the FUT Champions Cup Manchester and the US $22,000 prize.

* Eligibility restrictions apply.  Not all platforms are supported for qualification.  See Official Rules for details. Final terms and structure subject to change.