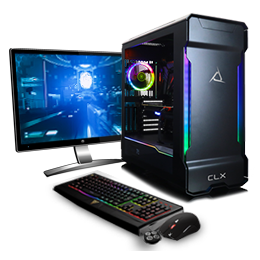 “The new AMD CPUs and GPUs not only turn heads with their benchmark results, but also when it comes to their price and performance ratio,” says Jorge Percival, Director of Marketing & Product Development. “CLX prides itself in providing gamers with the best selection of products and we can’t wait to showcase the new AMD components in our custom builds.”

“The new generation of Ryzen and Radeon products are the culmination of years of research, testing, and engineering,” says Chris Kilburn, corporate vice president and general manager, Client Channel, AMD. “CLX and AMD share the same passion for gaming, and we encourage gamers to experience the power of our new components in a CLX custom desktop.”

About CLX
CLX is a custom PC integrator catering to gamers and content creators. CLX was formed in January 2016 and is an extension of Cybertron International, one of the largest system integrators in the US since 1997. CLX believes in quality, attention to detail, and giving gamers the ability to choose exactly what they desire. Recognized for its award-winning custom designs and paint work, CLX offers a range of carefully curated systems or a completely customized experience by allowing gamers the ability to configure their own.

CLX systems can be found on clxgaming.com, Amazon, Best Buy, Walmart, and other retail partners.