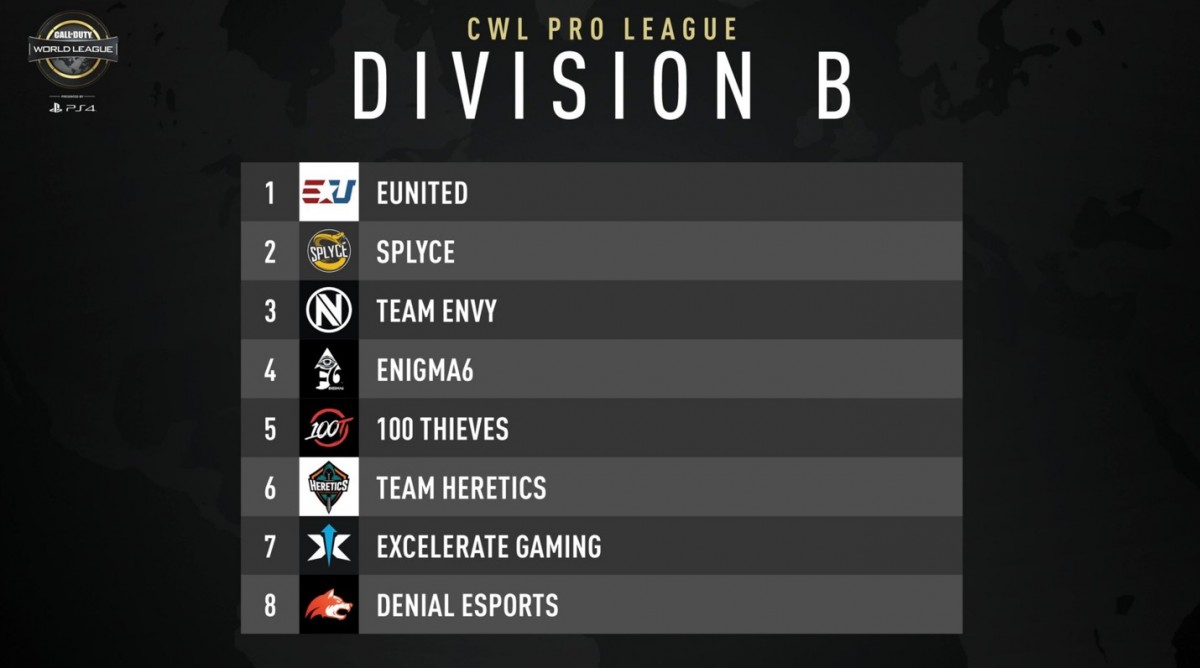 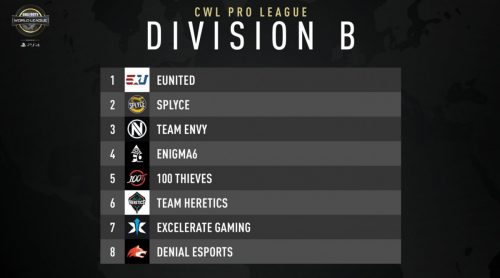 The CWL Pro League, Presented by PlayStation 4, will feature 16 of the best Call of Duty teams from around the world as they compete at the MLG Arena in Columbus, OH.

Split into two eight-team divisions, each team will face every squad in their division twice, as well as all of the teams in the opposite division once.

Here’s a look at the eight teams in Division B:

eUnited entered the 2019 season keeping their core of the Sanderson twins – Alec “Arcitys” and Preston “Prestinni” – as well as James “Clayster” Eubanks, the most experienced player in the CWL today.

At CWL Las Vegas, their chemistry shone through, as they played off Arcitys’ hot hands all the way to a second-place finish.

This young organization has not won a CWL event since February 12, 2017. As eUnited enter Division B, they are hoping to break a two-year drought after coming close to adding a second CWL trophy to their mantle.

World Champions, Contenders Among the Division B Pack

Three more Division B teams – Splyce, 100 Thieves, and Team Envy – have rosters stacked with household names who have shown time and time again why they keep coming back to the Pro League.

Team Envy is your 2018 CWL Champions mixed with the franchise’s cornerstone known as Cuyler “Huke” Garland. They were the most dominant team in the PLQ, and if they continue to stay hot in 2019, Patrick “ACHES” Price and Bryan “Apathy” Zhelyazkov might need to get comfortable wearing three championship rings around town.

Splyce only kept Irish ace Jordan “Jurd” Crowley from last year’s roster and rebuilt with four talented American players who have raw skill, proven results, and Pro League experience. This unique roster got the bronze at CWL Vegas, but if they learn how to clutch up in Search and Destroy, they might go for gold in 2019.

100 Thieves had a rough start in the PLQ but made a phenomenal turnaround to make it into the league. After qualifying, they made a major move in making Maurice “Fero” Henrique a substitute and bringing in FaZe Clan’s Preston “Priestahh” Greiner.

In theory, the move was to put Kenny “Kenny” Williams, a 2018 CWL All-Star, in a more comfortable role. With that in mind, all eyes will be on the young gun during the opening weeks of play to see if he can return to vintage form.

Enigmas and Dark Horses in the Pro League

Enigma6 Group and Excelerate Gaming both bring unique rosters that could just shock the status quo.

Enigma6, owned by team captain Jordon “General” General, brought in Bradley “Frosty” Bergstrom in the hopes that his game would translate over well to the CWL, which he proved in the PLQ. Combined with a breakout young gun in Matthew “KiSMET” Tinsley, E6 looks to make noise and upset Pro League regulars in this tough division.

Excelerate Gaming is the team born out of a hard-working community that knows how to, in the words of Christopher “ProFeeZy” Astudillo, #GetBusy. This team played without fear in the PLQ, using a heavily aggressive style to sweep their group. After picking up Robert “RobbieB3319” Brugnoli, a standout player on the unsuccessful Nation of Power, as a substitute, Excelerate is a dark horse ready to run wild on the competition.

Heretics, the first all-Spanish Pro League team in CWL history, is known for their heart and chemistry, bonding for years while competing in Spain. At the PLQ, Alejandro “Lucky” López was en fuego, and Juan “JurNii” Antonio González had one of the best S&D performances in CWL history. In short, this team is ready to prove that Spain has a thriving, talented, and strong competitive scene, and is putting all Division B teams on notice.

Once upon a time, Denial Esports was the brand that represented the 2015 Call of Duty Champions. In 2019, the Wolfpack – what Denial calls its players and fans – is back with an all-French team comprised of some of the best players in the country, including a promising newcomer in substitute Thibaud “Staan” Gounod. While this squad barely got out of the PLQ, they hope to bring prestige back to the organization with a strong showing, and potentially a championship run, in Division B.

Who will win out of Division B? Tune into the CWL Pro League from February 4 to July 5 on the official Call of Duty Twitch channel, as well as on majorleaguegaming.com, to find out. You can also check out the schedule of matches on the official CWL website here.

For more intel about Call of Duty World League and Call of Duty: Black Ops 4, be sure to visit CallofDuty.com/esports and follow @CallofDuty, @CODWorldLeague and @Treyarch on Twitter.