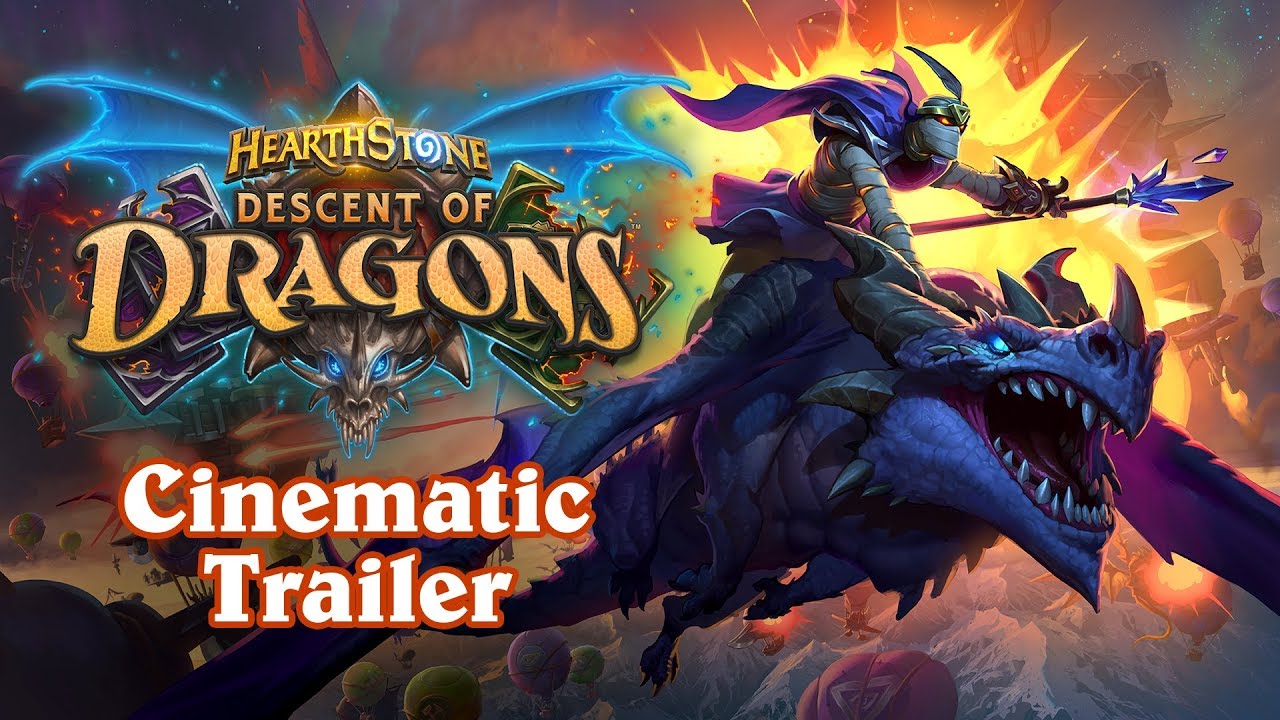 The Year of the Dragon began with Rise of Shadows™, where players were introduced to the League of E.V.I.L., a shadowy organization led by the notorious Archvillain Rafaam. In Saviors of Uldum™, the villains threatened to unleash a world-ending plague, but players joined up with the League of Explorers to save the day. Now, in Descent of Dragons, the forces of good and evil will settle things once and for all with the help of dragons—lots and lots of dragons.

The League of E.V.I.L. plans to bring doom to Azeroth by resurrecting Galakrond—the father of all dragons—who’s playable in different forms in Hearthstone as a set of five new Hero cards. Available to the five “E.V.I.L.” classes—Priest, Rogue, Shaman, Warlock, and Warrior—Galakrond takes on a form appropriate to the corresponding class, each with a unique Battlecry and Hero Power.

Cultist minions and spells with the new Invoke keyword will trigger the effect of Galakrond’s Hero Power. Invoking multiple times upgrades Galakrond into his two increasingly stronger forms, the mightiest of which is Galakrond, Azeroth’s End—which comes into play with a quadruple-strength Battlecry and a powerful claw attack. Hearthstone players who log in when Descent of Dragons swoops in* will receive all five Galakrond Hero cards free.

Heroic Druids, Hunters, Mages, and Paladins can cower in the face of Galakrond’s might, or they can bravely prepare to face their doom by completing the new Sidequests, which provide a variety of accessible early-game goals and rewards.

“We love constantly exploring new ideas with Hearthstone, from telling an epic year-long story to introducing fun new ways to play,” said J. Allen Brack, president of Blizzard Entertainment. “Descent of Dragons embodies that value—we think players will have a blast with all of the new cards as well as the new gameplay mechanics we’re introducing with this expansion.”

Until launch, players can pre-purchase two different Descent of Dragons card pack bundles: a 60-pack bundle, which includes a Descent of Dragons-specific golden Legendary card and the Shattering card back; and the massive 100-pack Mega Bundle, which includes those bonuses and the new Deathwing playable Warrior Hero. These bundles are available for £44.99 and £69.99, respectively; one of each can be purchased per account.

Prepare to Enter the Battlegrounds

This free game mode is designed as a standalone experience that uses Hearthstone as a foundation, but it does not require building or maintaining a card collection. Hearthstone: Battlegrounds will be available to everyone when it enters open beta on Tuesday, November 12. An early access period will be available from November 5–11 for everyone who attended BlizzCon, purchased the BlizzCon Virtual Ticket, or pre-purchased either of the Descent of Dragons bundles.

Beginning with Descent of Dragons, everyone will receive free access to Hearthstone: Battlegrounds. While nonessential for play, Hearthstone players will be able to unlock optional bonus features when they acquire card packs from the most recent expansion (starting with Descent of Dragons). † This includes free packs, those acquired with in-game gold, or those purchased with real money. At 10 packs, players unlock comprehensive stat-tracking in Hearthstone: Battlegrounds (slated for release following beta testing); at 20 they can choose from three different Bosses instead of two at the start of each match; and at 30, players unlock the ability to playfully communicate with their opponents using a visual emote system.

To learn more about Descent of Dragons, fly over to www.descentofdragons.com, and be on the lookout for more information regarding Battlegrounds soon.

*Limit one set of five Galakrond Hero cards per account. Must log in by March 31, 2020 to redeem offer.

†Bonus features are unlocked for a limited time and reset at the launch of each new Hearthstone expansion.