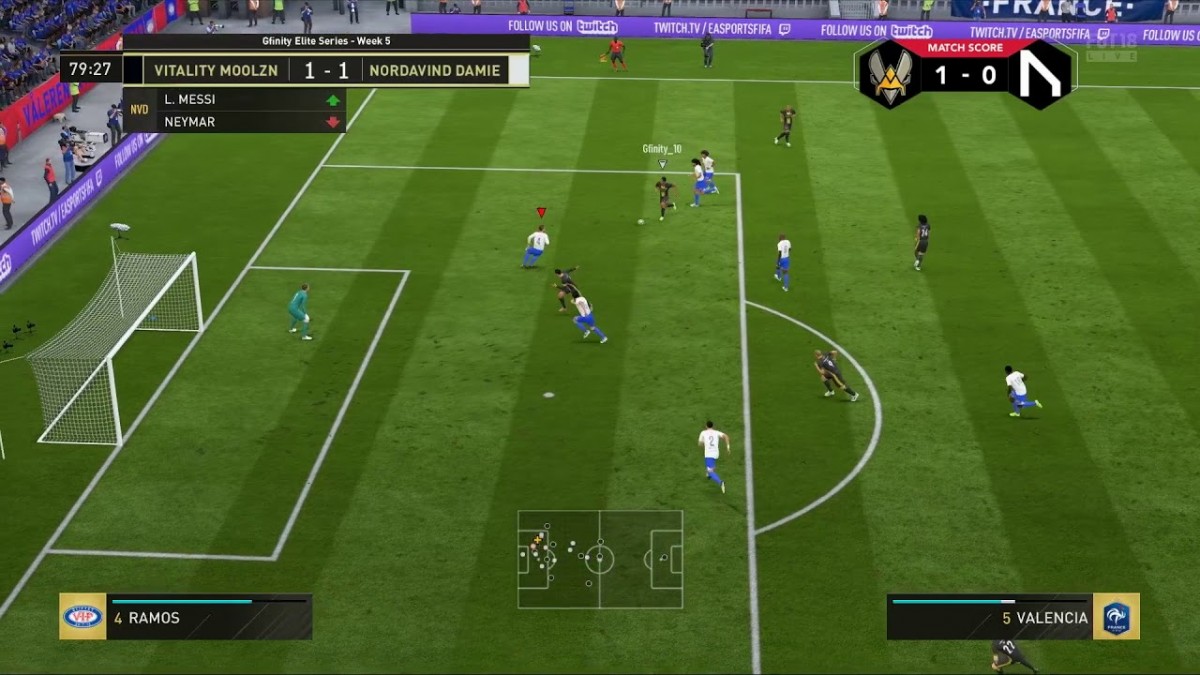 We knew the final week of league fixtures for Elite Series Season 3 was going to be packed with drama and thrills, and if anything we got more than we bargained for. The battle for quarter-final and semi-final spots came to an epic conclusion this past weekend. Those of a nervous disposition, look away now…

Friday’s first match in Group A was pivotal at both ends of the table. Hashtag United’s win over exceL in week 4 kept their playoff hopes alive, and they entered this week knowing that a 2-0 win would secure a playoff spot – anything less would leave them needing Vitality to get nothing out of their later match.

Unfortunately, opponents Envy were looking for the win that would all but seal up top spot in Group A, and they duly got it with a dogged 2-0 victory across two closely-fought legs. A strange first leg saw Hashtag Harry concede the first goal to Aero, switch formation, equalise then immediately switch BACK to his starting formation and being unable to reverse the tide when Aero duly took the lead again for a 2-1 first-leg win.

It was then down to Boras to get something from the match for Hashtag, but EisVogel wasn’t in a generous mood and controlled the second leg for a 3-1 victory that left Hashtag on the verge of elimination and saw Envy romp home as Group A winners.

With the previous result, all Vitality needed was a single point from their matchup with Nordavind to advance into the playoffs – and a brilliant clutch performance saw them defeat the Norwegian side 2-0 and leapfrog them into 2nd in the table. Captain Brian duly secured the point they needed by smashing Chnewar 4-1 in the first leg, before Moolzn came from a goal down to beat Damie 2-1 in the second leg.

As a result Nordavind take 3rd on 5 points, and Hashtag United come up agonisingly short – the failure to secure all three points last week against exceL ultimately coming back to haunt them. Vitality and Nordavind advance into playoffs, with Envy waiting for them in two weeks time in the semi-finals.

As if Group A wasn’t tense enough, Group B started Friday with all five teams in the division having a chance to qualify for playoffs. The first match saw 4th place Epsilon and bottom team ARES take on each other, the former in a similar scenario to Hashtag and the latter knowing nothing less than three points will do. And in one of the great clutch performances, Janoz and Mobacha combined to find vintage form and storm home to a 2-0 victory that both eliminated Epsilon and put ARES 3rd in the table.

Having started the day dead bottom of the table with just 1 point, all of a sudden it looked like ARES would pull off Mission Impossible and snatch a qualifying spot at the death.

All they needed was for Method to get no points at all from the final match of the evening: against Group B leaders UNILAD. A daunting prospect, especially when you consider just a single point would clinch top spot in the group for UNILAD – and a strong, controlled performance from Gorilla in the first leg was enough to see off Pricey 3-1 and claim the point UNILAD needed. Things were looking bleak for Method, and when Shellz took a 1-0 lead early in the second leg, ARES fans were daring to dream of the playoffs.

Fortunately for Method, they had one last ace up their sleeve; the comeback king Zelonius. A week ago his epic turnaround from 2-0 down to defeat Mobacha 3-2 helped Method beat ARES. And with time running out, he came through under enormous pressure to come from behind, slot home the winning goal late on, and survive an injury-time flurry to defeat Shellz 2-1 in a chaotic finale.

As the final whistle blew, Method’s fist-pumping and ARES’ dejected faces said it all; Method had stolen the final playoff spot at the last possible second. Heartbreak, joy and the finest of margins – this was esports at its most dramatic. Method join FNATIC in the quarter-finals, and those two teams will take on Vitality and Nordavind respectively this Thursday – UNILAD will watch on and await the winner of Method vs Vitality in the semi-finals.

You’d be forgiven for thinking Rocket League might have lacked for drama this week given all six playoff spots in both groups were already secure going into Saturday’s session. But whether it was top spot in the group or just pride, all our Elite Series teams still had a hell of a lot to play for – and it showed.

First up in Group A, it was Envy versus exceL; with both teams tied for 2nd on 7 points, whoever won this match would have a chance of snatching the #1 spot in the group depending on Vitality’s result later on against Hashtag United. And right from the off, there was only one team in this contest.

Envy were ruthless and clinical, with EyeIgnite’s powerful defence and attacking plays anchoring his side and punishing exceL for even the slightest of mistakes. In a flash, it was all over; Envy romping home 3-0 winners and taking temporary charge of Group A on 10 points.

Inspite of Envy’s heroics, Vitality remained favourites to top the group. Having gone unbeaten so far this season, even a losing bonus point would be enough for them to win the group on tiebreaker advantage – and against already-eliminated Hashtag United, they started as strong favourites to make it four wins from four. In perhaps the biggest shock of the weekend however, Hashtag United finally put together the complete performance we’ve been waiting for to topple the favourites 3-1 and end their frustrating campaign on a spectacular high.

No-one ever doubted the talents of Doomsee, Data and Flarke, but question marks always abounded over their temperament and mentality. They answered those questions in style, taking a 2-1 lead and holding firm to snuff out a Vitality comeback. With one last Doomsee goal on the buzzer, the monumental upset victory was duly secured by Hashtag – and with Vitality failing to take even a losing bonus point out of the match, it was Envy who clinched the Group A crown in stunning fashion.

Over in Group B things were even more tense; Method and Epsilon started the day tied for top spot, with FNATIC just one point behind in 3rd place. It was Epsilon up first against bottom of the table UNILAD, with Epsilon needing to win and hope FNATIC defeat Method in the next fixture to take the Group B #1 spot. And inspite of UNILAD’s entirely reserve roster causing them some problems at times, Epsilon eventually claimed the 3-1 win that they needed as the Challenger Series graduates continue their impressive upward curve in Season 3.

The ball was now in Method’s court, and they duly returned serve with an impressive 3-1 victory over FNATIC. Having eliminated favourites ARES in shocking fashion last week, FNATIC came in with plenty of confidence and actually took the first game of the set, giving Epsilon hope of ‘doing an Envy’ and snatching top spot at the last.

However, Method were not to be denied and they moved through the gears with impressive resolve to take the win they needed to win Group B on tiebreaker advantage over Epsilon. They join Envy in the semi-finals; Epsilon will take on exceL and FNATIC will tackle Vitality in the quarter-finals this Saturday.

Group B action kicked off Saturday evening, and the first match on deck was a straight-up playoff eliminator between Method and Epsilon. Winner would advance to playoffs, loser would go home and wonder what might have been. Epsilon came in off the back of a incredible 4-0 whitewash of UNILAD the previous week to save their season, but all three architects of that result were on Brussels Challenge duty. It was all down to their reserve lineup, and they more than held their own in a back-and-forth match against Method’s big guns and reached set point first.

ImStillDaDaddy anchored his side as the match went all the way to Game 7 – and in a sloppy and dramatic final set that had casters Logan and Jammerz yelling in disbelief at the amount of missed oppurtunities, Kuja somehow prevailed over Flawless Deku to edge his side into Playoffs at the expense of Method. Two weeks ago the playoffs seemed a distant dream for Epsilon, and they deserve a lot of credit for such a great comeback.

Over in Group A, Hashtag United faced Nordavind looking for a second straight upset victory after last week’s heart-stopping triumph over Vitality. Another win would give them a chance of qualifying depending on the result of the evening’s other Group A match – but against one of Season 3’s standout teams, ultimately this was a moot point.

Nordavind’s duo of Momi and Phenom have been quite simply outstanding this season, with 12 set wins and just one loss between them – and both continued their blistering form against DarkMoonHado and team captain GinoDaCampo. Coupled with debutant Veggey blowing away JesterPower on his first Elite Series start, and Nordavind cruised home 4-0 winners. They take 2nd place in Group A behind group winners Envy in dominant fashion – Hashtag will rue a slow start to the season leaving them with too much ground to make up.

Next up back in Group B, it was a head-to-head clash for top spot in the group between FNATIC and unbeaten ARES. Whoever won this one would secure #1 spot in Group B, and inspite of ARES entering as favourites it was FNATIC who got off to the better start as Brick and Shakz took the opening sets. Even after an ARES comeback to level scores, it was Shakz who put his team within match point after an outrageous win over Nasty Nas.

But there was only so much FNATIC could do to delay the ARES hype train, and it was left to Abdess, the pound-for-pound best player of Season 3 so far, to clinch a thrilling final set against Brick and seal the only 100% league record in all of Elite Series this season. They win Group B in style, and FNATIC advance in 2nd place with a losing bonus point.

Saturday night’s main event was the Group A playoff eliminator between Vitality and former champions exceL. It seemed unthinkable, but going into Saturday exceL sat 4th and in danger of missing out on playoffs for the first time in Elite Series history after previous disappointing defeats to Envy and Nordavind. As for Vitality, their last-second loss to Hashtag United last week had also put them in peril and left both teams in a simple scenario; winner goes through, loser goes home.

In such high-pressure circumstances, exceL’s battle-hardened squad drew on all their experience and delivered an impeccable performance to see off Vitality’s young challengers 4-1. Season 2 champion TKR tried anchoring his team and leading by example, but unfortunately he and his teammates were up against a Brian, Hurricane and Infexious trio that had rediscovered their best form and were not going to be denied a third straight run to the playoffs.

Ultimately Vitality paid the price for failing to see off Hashtag United last week, but lead by TKR they have a promising unit – if they can stay together for Season 4 it will be fascinating to see how far they can go.

So as the dust settled, it left a playoff picture that looks like this: reigning champions Envy and unbeaten ARES advance into the semi-finals, whilst next week’s quarter-final lineup sees Nordavind confront Epsilon and FNATIC tackle exceL.

And guess who exceL’s semi-final opponents would be if they overcome FNATIC?

They are seemingly destined to do this forever.

The playoff lineup set and we now take a brief pause before the quarter-finals get underway on Thursday. Get your FREE tickets to come and watch all the action in the Gfinity Arena here, and you’ll also be able to watch live exclusively on Facebook every single week.