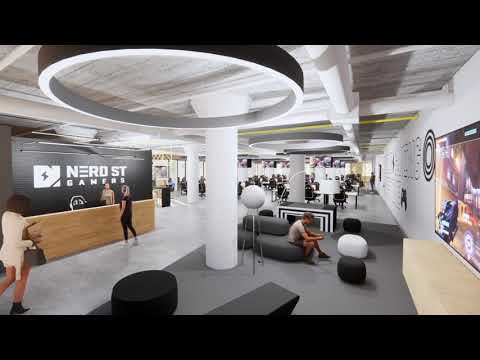 Nerd Street Gamers, the national esports infrastructure company dedicated to powering competitive opportunities and events for gamers, announces it will open the world’s first esports industry campus called “The Block” at 401 North Broad Street in Philadelphia. The space will not only function as Nerd Street Gamers’ new corporate headquarters, but it will also include global broadcast studios, dedicated training centers for professional teams and schools, educational space for community partners, and, subject to zoning approval, a Localhost facility capable of hosting community, scholastic, amateur and pro-level events, and programming. 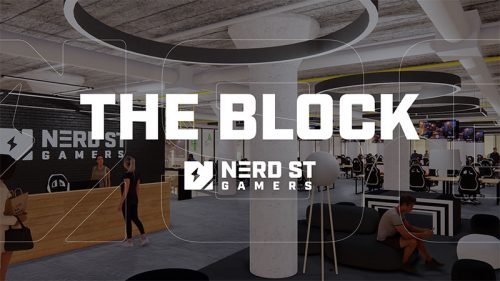 Strategically located at the juncture of multiple long-haul and metro fiber routes, the facility’s internet capabilities support a near-zero lag time for players, shaving off crucial milliseconds when competing online.
“Not only are we creating one of the industry’s largest gaming landmarks with The Block, but we’re also building a home for every member of Philadelphia’s gaming community and contributing a vital element to the redevelopment of North Broad Street,” said John Fazio, founder and CEO of Nerd Street Gamers. “With this esports campus, we’re supporting the growth of the industry as a whole by increasing access to opportunities for gamers, public organizations, educational institutions, and the community at large.”

As part of this development, Nerd Street Gamers aims to provide low-cost access to high quality equipment and education to the Philadelphia community. The company is also partnering with a number of local organizations and educational institutions for their respective esports programs, including Temple University who will engage with The Block through its School of Sport, Tourism and Hospitality Management. Other partners that will take advantage of this facility include the likes of Comcast NBCUniversal LIFT Labs, Team Altemus, Aim Lab and Tech Girlz.

Nerd Street Gamers is furthering its commitment to the local and national esports community with The Block by putting inclusivity and opportunity at the forefront of the esports campus. The team will be rolling out a partnership with the Center for Autism and Neurodiversity at Jefferson Health to launch procedures, programs and initiatives that leverage the inclusion of the talents of the autism community to positively impact the world of esports.

“By collaborating with Nerd Street Gamers, we can expand the innovation they bring to the city as a whole and empower and showcase the strengths of individuals with autism,” said Wendy Ross, Director at Jefferson Health’s Center for Autism and Neurodiversity. “Esports is in a unique position to provide new social and job opportunities for people with autism, and this esports campus in Philadelphia is an incredible launching point for the entire industry.”

Once known as the Terminal Commerce Building, 401 North Broad is owned by Netrality, the operator of strategic, fiber dense data centers that facilitate the interconnection between major fiber networks enabling regional connectivity.

“401 North Broad is the quintessential location for the world’s first esports campus. We pursued Nerd Street Gamers knowing that the immense connectivity options within our property would ensure near-zero latency for competitive gamers, both on and off-premise,” said Jerry Marshall, Chief Executive Officer at Netrality Data Centers. “Greater connectivity translates directly to competitive advantages in just about every industry, and that’s no different for gamers. We’re delighted to have Nerd Street Gamers join Netrality’s connectivity ecosystem and bring those advantages to esports.”

Philadelphia is rapidly becoming a true esports hub in the United States. Fusion Arena, the Comcast Spectacor and The Cordish Companies’ $50 million next-generation esports and entertainment venue is slated to open in the heart of the Philadelphia Sports Complex. The Block will solidify Philadelphia’s role as a destination for industry professionals and fans by offering practice facilities, broadcast studios, and exhibition opportunities for professional teams visiting the area. The future professional athletes, on-screen talent, coaches, broadcast teams, and more that will reach the Fusion Arena stages and stages all over the world will begin their journey at The Block.

The announcement of a new headquarters in Philadelphia is the latest milestone for the fast-growing Philadelphia gaming company. In the fourth quarter of 2019, Nerd Street Gamers announced a Series A fundraising round that included plans with retailer Five Below to build as many as 70 Localhosts attached to Five Below stores.