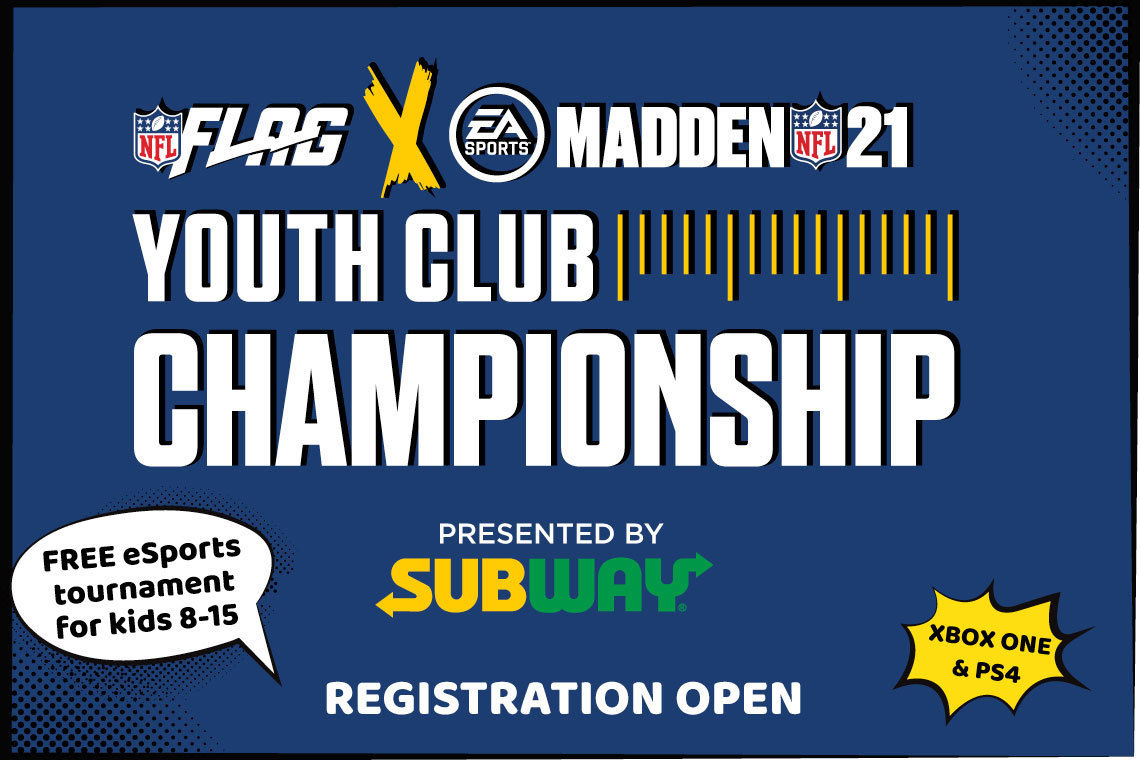 Players can represent one of 32 different NFL clubs throughout the Madden series, hosted on esports platform Battlefy, and compete in a 1-on-1, double elimination bracket for a chance to be a finalist in the virtual Championship event around the 2021 Super Bowl and win a PS5 or Xbox Series X and NFL Gear. 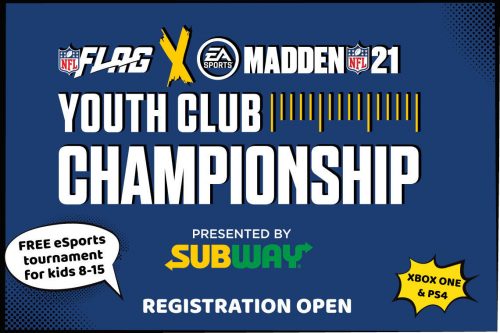 To participate, players must have access to Madden NFL 21 on Xbox One or PS4. Players are not required to be an NFL FLAG athlete.

“We wanted to open up this opportunity to all young NFL fans so that everyone can experience the excitement of representing their team on Madden NFL 21,” said NFL FLAG Executive Director Izell Reese. “With the support of the NFL, Subway and Battlefy, we’re able to offer a once-in-a-lifetime event for gamers across the country and fulfill the competitive drive that many of them are missing off of the football field. Athletes are eager to play, and we anticipate over 30,000 participants, making this the largest youth Madden esports tournament ever.”

“We are continuously looking to grow the game and are excited to bring the NFL FLAG tournament to the esports community,” said Rachel Hoagland, NFL Vice President and Head of Gaming & eSports. “Along with Madden, Reigning Champs Experiences and Subway, we will be able to create memorable and shared experiences for our younger fans to enjoy while showing pride for their favorite NFL teams.”

Event operator Battlefy will host 32 NFC and 32 AFC tournaments in December – 16 on PS4 and 16 on Xbox One – leading up to the Youth Club Finals February 4-6. Finalists will compete in a live, virtual championship event during the 2021 Super Bowl weekend.

“As the digital home of 230,000 independently operated esports tournaments and leagues across the globe, Battlefy is thrilled to partner with NFL FLAG as they continue to bring the excitement, passion, and competition from the field to the online world of esports,” said Zach Hahn, Global Head of Sales with Battlefy. “It is very rewarding to give kids a chance to compete and represent their favorite teams in a safe and competitive environment. I know I would have loved that as a kid!”

The NFL FLAG Madden 21 Youth Club Championship Presented by Subway will follow the Madden NFL Championship series, which brings together the largest Madden NFL community for an annual gaming competition for gamers 16 and older, hosted by EA Sports.

Subway, the exclusive Official Sandwich Sponsor of the National Football League (NFL), is helping guests and athletes alike make a good call by turning football season into Footlong Season. With special deals and new Footlong flavors piled high with veggies on fresh baked bread, guests can fuel up for a big game or a busy day.

NFL FLAG is an NFL licensed property of more than 1,600 locally operated leagues and over 500,000 youth athletes across all 50 states.

NFL FLAG is a fun and accessible non-contact league made available for youth ages 5-17. Flag football is a growing sport with regular participation of more than 3 million youth and adults in the United States.