The first of the season’s Regional Final events is coming your way this weekend! SEA Major 2019 – Asian Regional Final is being held in Singapore from October 12th through 13th. Most of Asia’s top players will be competing. Being a Regional Final, the structure of the event is a bit different from other Premier Events so check out those details below and be sure to tune in to watch it this weekend using the live stream!

On the second day, October 13th, the Regional Final Tournament (CPT Asia Finals) takes place and is an eight player invitation-only event consisting of the top eight players from the CPT Asia Leaderboard. See the Rules page for details. 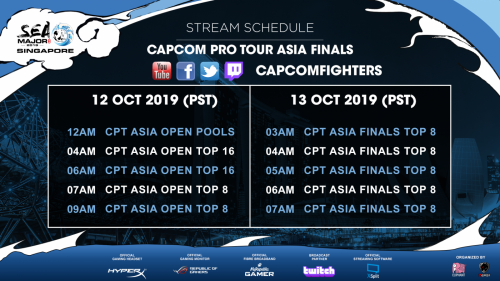 More Ways to Watch Premier Events Live!
You can also tune in to Capcom Fighters on YouTube and on Street Fighter on Facebook to watch the action from Premier Events live.