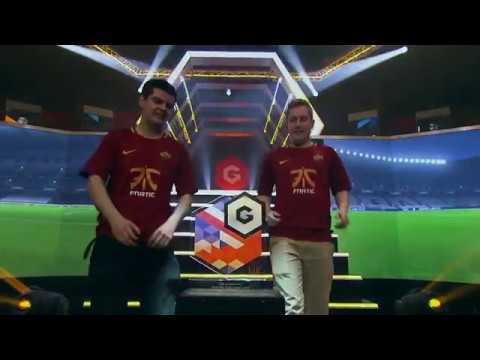 After an absolutely spectacular weekend of action, the curtain has fallen on Gfinity Elite Series Season 3 – and as the dust settles, we can reflect on the fact that have three brand new Elite Series champions. The crowds came out, the Gfinity Arena was packed all weekend, and the noise levels were matched by the skill levels from our teams. Legends were made, reputations were cemented and egos were trashed. And one thing is for certain; heart rates won’t be returning to normal for a long time yet. Let’s break down all the action from Elite Series Season 3 Grand Finals weekend.

With two semi-finals to deal with on Friday night, we commenced the evening session with perhaps the most insane FIFA 18 match in esports history. Certainly casters Brandon Smith and Richard Buckley were left speechless at multiple moments in a see-saw contest that swung back and forth, took more twists and turns than a Hollywood thriller, and concluded in a penalty shootout that finally saw FNATIC clinch a place in the Grand Final at the expense of Envy as the Gfinity Arena lost its collective mind.

The second semi-final was a slightly less dramatic affair, but still had its fair share of dramatic shifts as UNILAD dispatched the plucky Method to book their place in the Grand Final. Winning the coin toss, UNILAD elected to put out-of-form Shaun ‘Shellzz’ Springette in first against the comeback king Zelonius – the logic being that they’d rather not let Nathan ‘Zelonius’ Horton go in the second leg and pull more rabbits out of his hat. The tactic worked perfectly; Nathan ‘Zelonius’ Horton repeated his 2-1 victory over Shaun ‘Shellzz’ Springette from their group stage match, but Gorilla stormed back in the second leg to smashed three goals past Pricey in the first twenty minutes and lock the game down. A 4-2 aggregate victory was duly secured in clinical fashion – Method can be very proud of their efforts for Season 3, but this was all UNILAD as the favourites took their place in the Grand Final.

That set up the Grand Final itself between FNATIC and UNILAD. A fascinating clash between the team that had battled so hard to make the Grand Final up against the team many predicted pre-season as favourites. Surprisingly, Tassal ‘Tass’ Rushan was given his Elite Series debut in the Grand Final against Gorilla, and though he fought hard and came back time and again Conran ‘Rannerz’ Tobin was too hot to handle as he won the first leg 3-2. It was all down to Shaun ‘Shellzz’ Springette to somehow snap his recent run of poor form against the ice-cold Simon ‘Zimme’ Nystedt; and this time, no penalty shootouts were needed. Simon ‘Zimme’ Nystedt raced into a 3-0 lead, and as Shaun ‘Shellzz’ Springette fought back to 3-2 and sensed an epic comeback, FNATIC’s ace dealt the fatal blow and sealed the second leg 4-2; and in the process, clinched the Elite Series Championship in epic fashion. For Conran ‘Rannerz’ Tobin, it has been an epic journey from Challenger Series draft pick to substitute to starter player to Elite Series Champion – and for Simon ‘Zimme’ Nystedt, he was a man for his word and promptly received an ‘R9’ Ronaldo haircut live on stage as he and his teammates lifted the Elite Series trophy.

On Saturday afternoon it was time to crown new Rocket League champions – and after an ultra-competitive final match, it was Renault Team Vitality who put the exclamation point on an excellent first Elite Series season by defeating Envy 4-1 to lift the trophy.

This was the ultimate example of a match that was far closer than the scoreline suggested – a brilliant first game saw Envy take an early lead, and even as Vitality grew into the game and took control, the final three games all went to overtime as both teams went blow-for-blow in a titanic contest. Ultimately there was just no stopping the team in form; a Victor ‘Fairy Peak’ Locquet playing on a level few others can touch right now, backed up by Philip ‘Paschy90’ Paschmeyer and top goalscorer Sandro ‘Freakii’ Holzwarth who were in ruthless finishing form, would have been a match for pretty much any Rocket League team in the world let alone Elite Series. Envy will be frustrated that they didn’t quite show their best on the day, but this was still another excellent performance – and having missed playoffs altogether in the first two Elite Series seasons, they can still be proud of a much-improved performance this term. But ultimately, the day belonged to Gregan’s boys in black and yellow – and with the Elite Series trophy in their back pocket and a spot in RLCS European Playoffs in the bank, there’s no limit to how far they can go in 2018.

It was a similar story on Saturday evening in SFV, as the form team of the season were able to despatch their battling challengers 4-1 in a match that probably deserved a much closer scoreline than it got. Ultimately though, this was the crowning moment for Season 3’s breakout dominant force – the unstoppable Nordavind.

After they bodied ARES 4-0 in their semi-final, they entered this Grand Final as overwhelming favorites – with some even wondering if they would register their FIFTH 4-0 of Season 3 on the way to lifting the title. But standing opposite them were a FNATIC team full of gritty determination and confidence having dumped reigning champions Envy out of Season 3 in their semi-final – and ultimately despite the 4-1 scoreline, they gave Nordavind one of their toughest challenges of the season. The unbeaten sensation Arman ‘Phenom’ Hanjani blew away Christ ‘Akainu’ Onema in the opening set, but Imad ‘Zera’ Khettab quickly struck back against Muhammed ‘Momi’ Berk to put FNATIC on the board. From there it was a match of tiny margins; Shakz failed to put away Elias ‘SaltyKid’ Ekberg twice in their set as Nordavind’s wildcard restored their lead, before Muhammed ‘Momi’ Berk avenged his loss to Imad ‘Zera’ Khettab in another razor-close set to put Nordavind on match point. Having already lost to him once in this match, to keep his team in the match Christ ‘Akainu’ Onema had to do what no other player has done all season – beat Arman ‘Phenom’ Hanjani. And in a classic final set that swung back and forth, victory flashed before him multiple times and he came agonisingly close.

But ultimately – by the skin of his teeth – Arman ‘Phenom’ Hanjani’s unbeaten record remained intact, and Nordavind clinched a well-deserved Elite Series championship at the first time of asking. Poor Chris ‘Akainu’ Onema was devastated at the final bell, but he and his teammates can be incredibly proud of their season in taking FNATIC to the finals at the first time of asking, eliminating both former champions in the process in back-to-back playoff matches. But the night, much like the entire season, belonged to Nordavind – and quite frankly, one has to wonder what on earth it will take to beat this team (and Arman ‘Phenom’ Hanjani!) and take the title off them in Season 4.