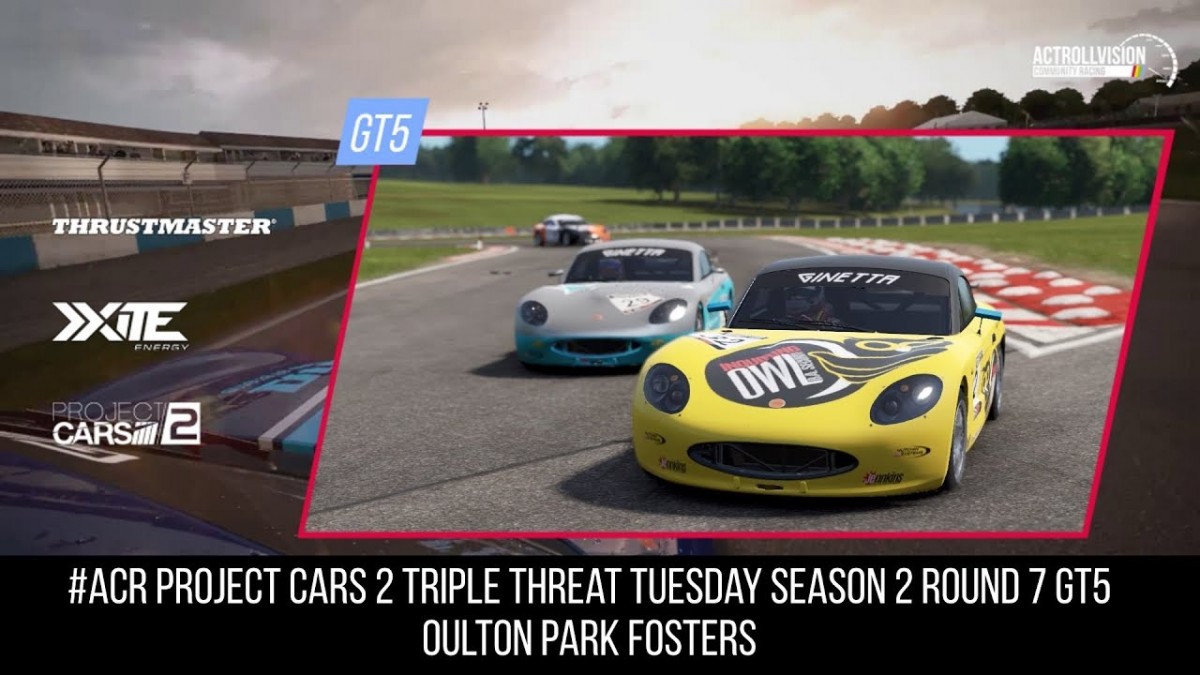 The Actrollvision Community Racing “Triple Threat” league is nearing its finale after another few months of tight competition in Project CARS 2. Round 7 of 8 began with the GT5 class at Oulton Park. Bafrage was looking to extend his championship lead of 6 points over the tied second place drivers of Graham_068 and Fearmulle.

Unfortunately for the championship leader it was not his best qualifying session, and he only managed third with his two rivals in first and second. Graham_068 snatched pole. The race start was not so bad, as the top three got away well and Fearmulle jumped Graham into turn one. However, mistakes by Graham and Bafrage, put them down to seventh and eleventh respectively. Fearmmulle and L_Sergio batted for the lead, but a penalty for Sergio with only five minutes remaining cost him the win. Elsewhere we saw Bafrage battle through the whole field including a four-lap duel with Graham_068 to take second and a 2 point lead into the Sugo showdown next week. Bafrage was Driver of the Day. Read on for the GT4 and GT3 results.

The GT4 class raced next. They left Cheshire behind and travelled across the globe to Zhuhai, where they produced an outstanding race. Already champion with two races to spare, Bubblebart could only manage fifth in qualifying. Bluesboy71 took pole, whilst second in the championship, Xwolf1369 could only manage ninth. At the green light it was another impressive start as the drivers avoided any casualties, and the gap from first to ninth over the first few laps was only four seconds. It was a very tight affair, but with tight racing comes mistakes, and there were plenty. After 25 minutes of the 30 Xwolf made some brave moves and took full advantage of others’ misfortune to make his way to the front. Could he be the first American to win an ACR race? Actrollvision was whispering on the stream during the last few laps to try not to jinx the result, but he needn’t have worried as Xwolf took the victory. Second was Karting-70, and a very well deserved third for GoonerBob1104. Xwolf1369 was Driver of the Day.

Finally it was time for the GT3 race, also at Zhuhai. The GT4 race was a tough act to follow, but up stepped hansfan and Blankfile. Blankfile knew he had to win this race for his championship hopes to stay alive, but he qualified second, so this was not going to be easy for the Team Kerb Clippers driver, up against Team ACR’s, hansfan. The lights went green, and Blankfile stormed to the lead to make up for qualifying. After ten minutes it was very clear that it was going to be a Team Kerb Clippers vs Team ACR fight to the end. Blankfile defending with his life at times, but just had the measure of hansfan to take the win. He also cut the lead to 6 points in the championship, so the battle will continue next week at Sugo. Curry and Borneo also finished just 0.001 apart with Borneo in front for third. Blankfile was the Driver of the Day.