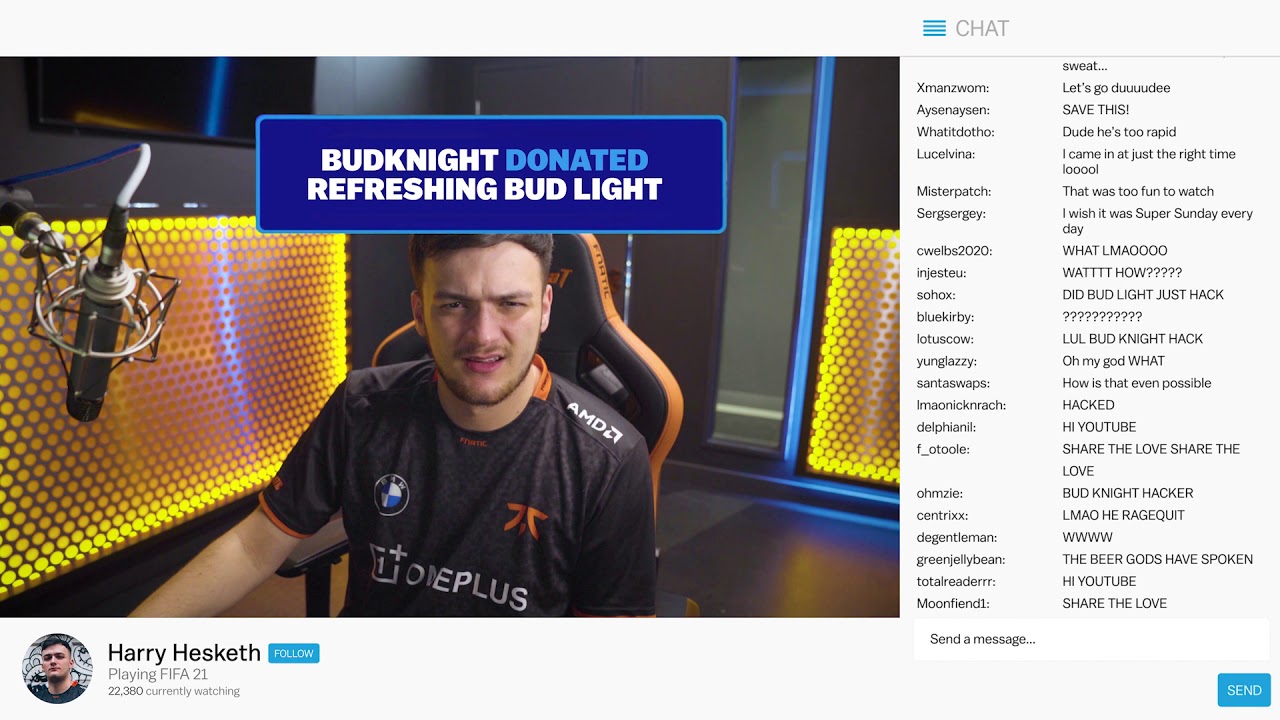 Known for being the official beer of the England senior men’s football team, Bud Light today announces a European first with another group of elite professional athletes with millions of avid fans – esports players.

The move includes a huge partnership with the UK’s most successful esports team of the last decade, Fnatic.

Bud Light has teamed up with firm fan favourite, professional player and creator for Fnatic – Harry Hesketh – in a 30-second video featuring the respawned Bud Knight, who seemingly perished in the Game of Thrones-inspired Bud Light Super Bowl advert last year. Watch the video here. The video will appear across Bud Light social channels, on Fnatic’s YouTube page and on Twitch from now and through December.

As part of the partnership Bud Light has launched the first ever beer and esports on-pack promotion in Europe, giving millions of gamers a chance to win big.

And Bud Light globally is no stranger to the esports community, having been named as a partner and official beer of the League of Legends Championship Series (LCS) in the US, earlier this year.

Bud Light also collaborated with Fnatic last year to host one of the country’s biggest viewing parties for the League of Legends Worlds Finals at the Clapham Grand in London.

Martina Isella, Sr Brand Manager at Bud Light says: “This year we wanted to make sure we were reaching our target audience of 18 to 30 year olds by modernising beer through culture and fun. We needed something that was more relevant than ever for this group, and esports is a growth phenomenon and one of the most rapidly growing passion points for this age bracket, which was accelerated by the pandemic.

“The audience in this space is massive and stats show that daily viewers in lockdown increased exponentially with the average daily viewers up by over 65%[2]. And although we’ve been playing in the world of esports for a while, we knew that this was the right time to take it to the next level. What better way to do this than by partnering with one of the most successful and iconic teams in esports history, Fnatic. We’re looking forward to what comes next for Bud Light and gaming – follow the Bud Knight on Twitter and watch this space.”

Glen Calvert, COO at FNATIC says: “Esports is already loved by many around the world and we are thrilled to be partnering with a fun and light-hearted brand like Bud Light to help us raise awareness of this fantastic sport to the masses. The prizes on offer are really exciting for anyone who’s passionate about esports, or indeed anyone who is keen to get involved in this growing community of fans.”

Harry Hesketh, athlete and content creator for Fnatic, says: “When I got approached to work with Bud Light for this campaign it felt like the right fit for me and my fans. Bud Light is a brand that doesn’t take themselves too seriously and it was a lot of fun working on this project and getting to meet the famous Bud Knight. We can’t wait to see who the winner of the competition is so we can welcome them to the team!”