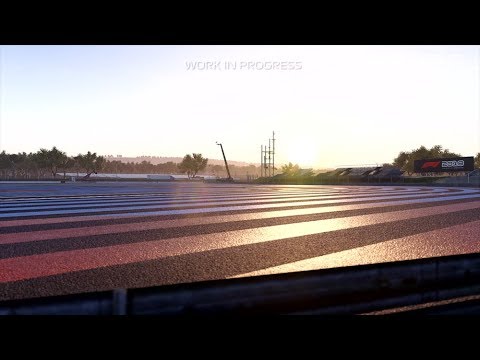 Codemasters® released a new trailer for F1 2018, the official videogame of the 2018 FIA FORMULA ONE WORLD CHAMPIONSHIP™, that showcases the return of the French Grand Prix to the calendar by talking to the local F1 drivers about the recreation of their home circuit in the new game. French nationals, Romain Grosjean, Esteban Ocon and Pierre Gasly, as well as Renault Sport Formula One Team’s Carlos Sainz, talked to Codemasters about the new Circuit Paul Ricard and their experience with the game.

“Of course the French Grand Prix is the one I am most looking forward to in the year,” said Haas F1 Team driver, Grosjean. “It will be my first time racing in my home Grand Prix and a lot of French fans are coming to support us.”

Gasly added: “I am massively excited. To have a home Grand Prix is a special feeling. You can really feel the support.”

This was also the first time that the four drivers were able to get their hands on F1 2018, which will release onto PlayStation®4 computer entertainment system, the Xbox One family of devices including the Xbox One X and Windows PC (DVD and via Steam) worldwide on Friday 24th August 2018.

“I have been playing games since I was a kid… and I haven’t stopped,” said Ocon. “The games have evolved massively and are getting more and more realistic. It is still my routine to go training during the day and I play for one or two hours in the evening… and I find it very useful. When we don’t have a race weekend I keep racing on my own.”

“This is my first try on F1 2018 and I am super impressed. I am a big fan of the games and have played them since I was a kid”, added Gasly. “Every year it keeps getting better.”

Sainz commented: “I spend my time at home practising in the Formula 1 game and on the simulator at Renault. You can be sure that we do this kind of practice.”

Reflecting on the feedback of the drivers, Lee Mather, Game Director, F1 2018 said: “It is fantastic for us to get time with the real drivers. These are the guys who know what it is really like to drive these incredible cars and to have them give honest feedback is always extremely valuable. The fact that they were all positive about the game and the direction in which we are taking it is great to hear.”

As well as the introduction of Circuit Paul Ricard Codemasters has already announced that players who pre-order or purchase ‘Day One’ copies of F1 2018 will have exclusive access to the iconic 2009 Brawn BGP-001 and the 2003 Williams FW25, as DLC content of the ‘F1 2018 Headline Edition. Alternatively, the two cars will be available to be purchased together at a later date.

F1 2018 will feature all of the official teams, drivers and circuits from the enthralling 2018 season. There will also be a host of classic cars available, an even deeper career mode and more.