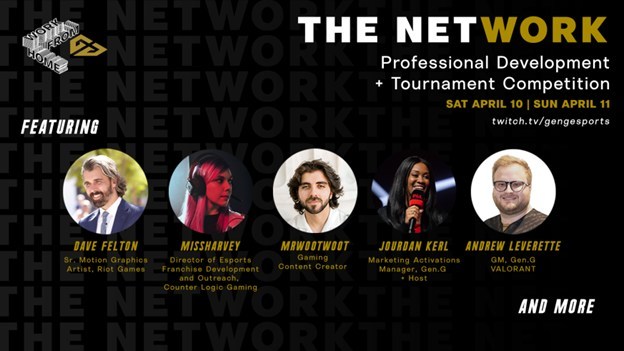 Global esports organization Gen.G and its partners Eastern Michigan University, and the University of Kentucky (UK) announced plans today to launch its first ever Work From Home: The NetWORK, a conference designed to provide professional development in esports and gaming.  Scheduled for April 10-11, 2021 virtually, the two-day event will offer panels, content and tournaments led by esports professionals, content creators, esports front office executives and collegiate players and coaches, and will be streamed live on twitch.tv/gengesports.

Panels will include topics on career paths and opportunities in esports, how to get hired in esports, collegiate conference panels, tips and tricks for content creation, how to run an esports organization at school, art & gaming, coaching in esports, and journalism in esports.

Fireside chats will include topics on working in an esports front office and building a path to becoming a pro esports athlete.

The event will also feature collegiate esports tournaments across League of Legends, VALORANT and Rocket League offering a $1000 grand prize to each winner of the tournaments.  Schools from across the country will be invited to participate.

“Our partnership with Gen.G continues to elevate to new heights as we bring together some of the best talent in the nation to offer professional development for students seeking a career in esports and gaming,” said James Smith, President of Eastern Michigan University. “We’ll also have some fun watching schools compete in our tournament to take home the grand prize.”

“Education is so critically important for Gen.G, and we are focused on developing the next generation to work in our industry,” said Chris Park, CEO of Gen.G. “This event is a true testament to the collaboration among Gen.G, Eastern Michigan, UK, partners and speakers to create a unique experience for students.”

Eastern Michigan and UK have collaborated on several integrations including tournaments, summer camps, charity streams, and most notably, as founding partners of the Gen.G Foundation, a $1 million commitment to developing the next-generation of leaders in the gaming industry over the next 10 years,  The fund will be used to support women, people of color, and low income students enrolled in a United States university or college who are interested in majoring in gaming, esports, entrepreneurship, journalism or content creation.