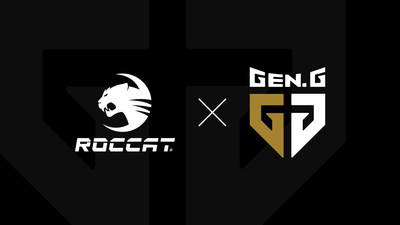 ROCCAT announced a new partnership with Gen.G Esports, a leading global esports organization fielding some of the best professional teams and players in the world across a variety of games. The new partnership sets ROCCAT as the official PC gaming accessories partner for keyboards, mice, and other PC peripherals of Gen.G’s Overwatch, League of Legends, and PUBG teams as well as their affiliated streamers.
Through the new partnership, Gen.G’s teams will be using ROCCAT’s latest gear, including the groundbreaking Elo series PC gaming headsets, the ridiculously fast and fan-favorite Vulcan keyboards (like the Vulcan TKL Pro – a recent recipient of a 5/5 Star Review + Platinum Award from T3), lightweight Burst gaming mice, and Sense mousepads. Additionally, ROCCAT will be working directly with Gen.G’s players and streamers to create a wealth of unique, engaging, and fun content for fans, as well as working with them to build their insights and competitive knowledge into future products.

“We’re extremely excited to be extending our esports partnerships to Korea with Gen.G Esports – one of the most well-respected esports organizations in the world,” said Juergen Stark, Chairman & CEO, Turtle Beach Corporation. “We’re growing our business in Korea and can’t wait for the teams, their fans, and gamers in the region to see why ROCCAT is fast becoming one of the most sought-after PC gaming accessory brands.”

“My roots are in competitive gaming and ROCCAT has a celebrated esports heritage based on delivering products that genuinely improve performance,” added Rene Korte, ROCCAT founder and General Manager for PC Products at Turtle Beach. “We’re excited to be building on that legacy by partnering with Gen.G and their roster of elite players.”
Gen.G Esports Co-President and COO Arnold Hur said, “We are very excited to partner with a brand like ROCCAT and look forward to their high-performance PC gaming products taking Gen.G Esports and our content creators to a whole new level.”