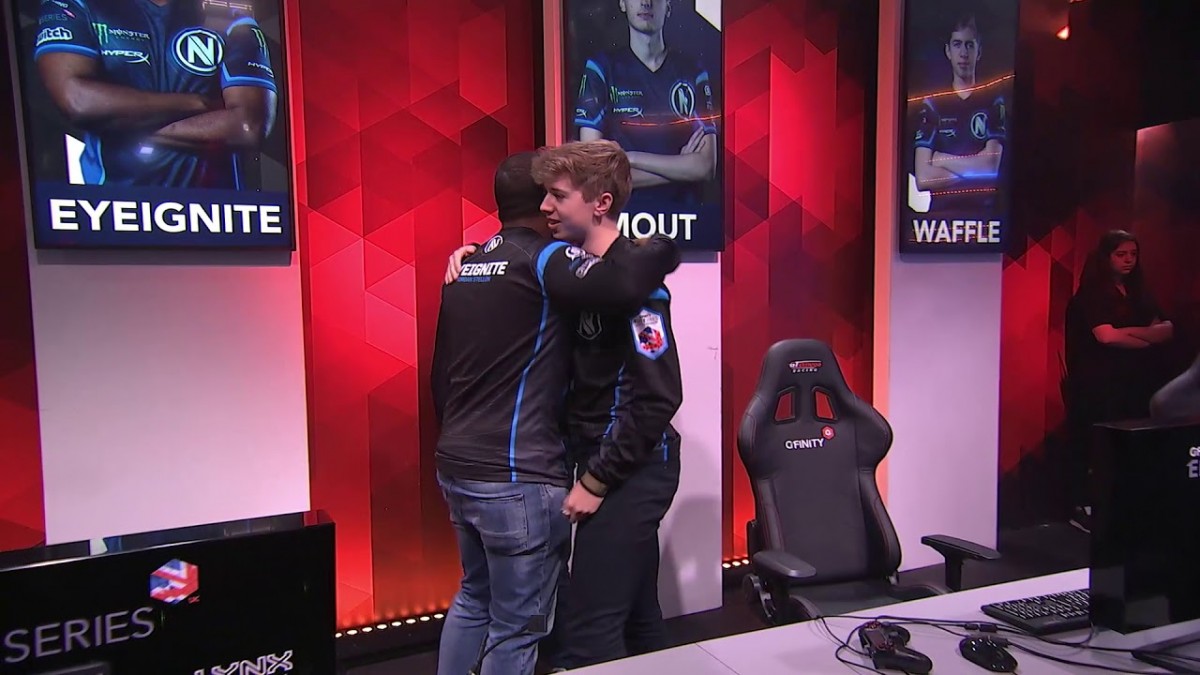 The sharp end of Elite Series Season 3 is officially here, and in a season that has zipped by at breakneck pace it’s appropriate that we were treated to four fast-paced and high-intensity matchups this past weekend. With FIFA saving their semi-final matches for this Friday night, it was Super Saturday as Rocket League and Street Fighter V had their semi-finals on the same day. And by the end of the day, reputations lay in ruins, entire season’s worth of work had gone up in smoke, and four teams were left standing ready to battle for the biggest prize in Gfinity competition this week.

We kicked off Saturday’s action with the first Rocket League semi-final as Group A winners Envy tackled the breakout stars of Epsilon. This was always going to be an interesting battle between the experienced and consistent Envy and the Challenger Series graduates of Epsilon who have successfully translated their online form into the LAN setting of the Gfinity Arena. And ultimately the veterans prevailed as Envy won an exciting match 4-2 to qualify for the Grand Final for the first time in their history.

This was another typical Envy performance; EyeIgnite driving everything forward with relentless intensity, supremely clinical in front of goal and trusting his teammates Waffle and Mout to keep his team out of the jaws of danger. Epsilon played their part in an entertaining contest, with Pugsay scoring an equaliser long after the clock had hit zero in Game 3 to raise the roof in the Gfinity Arena. On another day, this could easily have swung in their favour; this young roster can look back on their first Elite Series with a lot of pride, having completely vindicated Epsilon’s brave decision to draft an entire lineup from Challenger Series. But the day belonged to Envy and deservedly so; they will be entering this Saturday’s Grand Final with a lot of confidence.

The second semi-final was an absolutely fantastic contest, possibly the best match of the season, between Renault Vitality and Method. For once, Method’s all-stars were in the surprising position of entering an Elite Series match as the underdogs; a strange scenario given the championship-winning pedigree of Rix Ronday, Borito B and Shakahron, but recent poor results in the RLRS left the team low on confidence coming into this matchup. And in Vitality they were facing one of Europe’s most in-form teams, flying high in the RLCS – one division up from Method – and shrugging off a shock loss to Hashtag United to convincingly eliminate FNATIC in the quarter-finals.

Against this backdrop, Method surprised everyone by taking the opening game – but this only woke up Vitality, who proceeded to batter Method from pillar to post and race into a 3-1 lead as Fairy Peak in particular ran riot. Vitality looked to be running away with it, but with Method down 3-2 in Game 5 and on the brink of elimination, they exploded into life and battered the Vitality goal to win 4-3 in OT and keep their hopes alive. The comeback was well and truly alive, but Vitality finally slayed the Method beast as a Paschy90 goal in OT snatched the 3-2 win in OT in Game 6 to conclude a truly breathless contest. Vitality clinch a well-deserved spot in the Grand Final, and Fairy Peak deserves special praise for one of the all-time great performances – scoring incredible goals AND making vital last-second saves sometimes within seconds of each other. As for Method, we finally saw their very best form; and whilst it was too little too late, the roster of former champions went down swinging, and can still reflect on a strong season overall.

On paper, the two combatants in our first semi-final of Saturday evening were perhaps the two strongest teams of Elite Series Season 3. ARES entered the match as Group B winners with a perfect winning record for the season, and their opponents Nordavind contained two of the strongest performers of the season in Momi and Phenom – the latter boasting an incredible 95% round win rate.

This was all set to be a battle of the big guns in Elite Series SFV. Except Nordavind failed to read the script, and decimated ARES before they could even fire a shot.

In a quite frankly astonishing performance, Nordavind came out of the blocks at 100mph and blew away ARES before the latter could even get out of first gear. Right from the first set as Momi decimated NastyNas, this was as one-sided a contest as we’ve seen in Elite Series this season. Aside from Abdess pushing Phenom hard in the second set, ARES just couldn’t lay a finger on their opponents – SaltyKid found his best form to sweep aside a non-plussed Will2Pac and Momi closed out against Abdess to see Nordavind home 4-0 and leave the Gfinity Arena in stunned silence. As every read, combination, whiff punish and counter came off time after time for Nordavind, nothing seemed to work for poor ARES, and they were never able to gain a foothold in the contest. Their debut Elite Series ends in devastating fashion, but inspite of this loss they can look back on an impressive season overall; hopefully we get to see this lineup have another crack next season. As for Nordavind though, words can barely do justice for their fourth 4-0 shutout in six matches. Bar a surprise reverse to Vitality in the group stage and being pushed hard by Envy, no team has been able to even trouble this hugely confident side. Momi and Phenom are in utterly dominant form, and with SaltyKid rediscovering his confidence, it’s hard to know how on Earth someone goes about troubling let alone defeating this roster. They march into their first Grand Final as overwhelming favourites.

If the first semi-final was slightly disappointing for it’s one-sided nature, the second semi-final more than made up for it. This match had it all; epic momentum swings, spectacular pop-offs, a raucous crowd and brilliant SFV play.

And a shock result – Envy’s quest for back-to-back championship victories is officially over.

The architects of their demise were a hugely impressive FNATIC team, who prevailed 4-2 after a fast start and weathering the storm of a monstrous Envy comeback.

Similar to Nordavind, FNATIC hit the ground running – and as Zera and Akainu blew away Layo and Nassim-Claw in the opening sets, there was a real sense that ANOTHER 4-0 sweep was on the cards. But Mr Crimson and his elusive Dhalsim kept the reigning champions in the contest twice, the second time denying Zera match point and shifting momentum back towards Envy. With the crowd roaring and Envy sensing a monster comeback, Shakz stepped up against Layo knowing that he had to stop Envy’s momentum before it overwhelmed FNATIC. And in an all-time classic final set, the babyfaced assassin took aim and shot down Envy’s title hopes once and for all. A 4-2 victory duly secured, and a place in the Grand Final at the first time of asking for FNATIC.

And for their roster, a little bit of redemption. Zera and Akainu were part of the Prophecy team that were destroyed 4-0 by Envy in the Season 2 final, so this victory had to feel doubly sweet for the duo. For Shakz, his clutch victory in the final set secures a richly-deserved first appearance in the Grand Final after losing 4-0 in the semi-finals of Season 2 with Infused. They will enter the final match against Nordavind as underdogs given their opponents’ formidable form this season, but having defeated two former champions in as many weeks, FNATIC won’t fear any challenge that comes their way.

As for Envy, their title defence ends in the only fashion they know; spectacular, entertaining and all guns blazing. They’ve been excellent champions and great ambassadors for competitive SFV, and will return for Season 4 desperate to regain their crown. And that’s a scary prospect for whatever teams stand in their way.

So our finals for Rocket League and SFV are set. Combined with our FIFA 18 finals night this Friday, and this weekend will be utterly unmissable as Season 3 concludes and we crown new champions across the board. Get your FREE tickets to come and watch all the action in the Gfinity Arena here, and you’ll also be able to watch live exclusively on Facebook every single week.