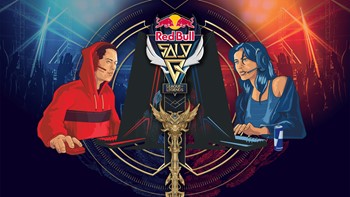 Red Bull Solo Q is the official 1v1 League of Legends tournament to find the best individual amateur player in the world. Since spring, players have been duelling for victory across the globe, with 79,000+ players competing across more than 35 countries and seven international online qualifiers. Additionally, entries tripled year-over-year. What began as a grassroots tournament in 2014 is now a highly competitive international circuit that offers amateur players an opportunity to battle like top League of Legends pros. Red Bull Solo Q puts a unique twist on a typical League of Legends match by pitting player against player in 1v1 duels where the player to draw “First Blood”, reach a 100-minion score, or destroy the opponent´s tower, wins. This year has seen 44 Red Bull Solo Q winners emerge victorious across the globe in national tournaments and international online qualifiers.

Players would have competed in the regional finals and world finals, but the global pandemic prevents the hosting of events which would reach the quality standards these champions deserve. All Red Bull Solo Q winners will receive unique player rewards this year, including a one-of-a-kind medal, unique merchandise, and other exclusive prizes.

As part of the partnership with League of Legends Esports Global Events, Red Bull Solo Q Champions from select regions will be given the chance to compete at the League of Legends All-Star Event, a celebration of its most-loved personalities and masterful pro players scheduled for Dec.18-20 (visit LoLesports.com for more information). Red Bull is the title sponsor of the 1v1 League of Legends competition at the 2020 All-Star Event, and Red Bull Solo Q representatives in Europe, North America, and South Korea, will have the chance to take part in three regional competitions at the prestigious event. The Red Bull 1v1 Tournament will feature a 16-person bracket, made up of pro players, veterans, and huge stars from the community who will compete alongside three Red Bull Solo Q representatives. Champions who have emerged through the 2020 Red Bull Solo Q circuit will face off in additional online tournaments to claim their spot in the All-Star Event, with one spot available per region. Fans can tune into the prestigious event from Dec.18-20.

Red Bull Solo Q will be back for 2021, building on the framework and success of the 2020 season. This year has seen rising stars alongside the biggest names in League of Legends, such as Eefje “Sjokz” Depoortere, the official brand ambassador of Red Bull Solo Q, take part to create unique storylines and contribute to the success of the event series.

The 2020 League of Legends All-Star Event broadcast schedule can be found here.