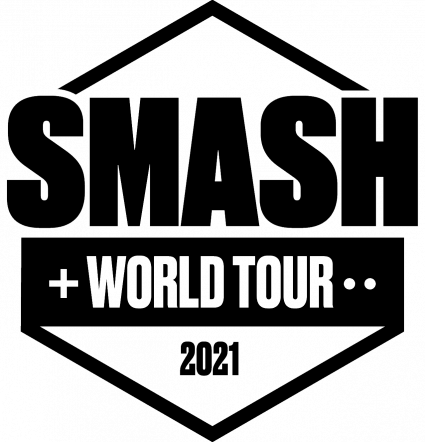 The circuit for both Ultimate and Melee is due for a return after being canceled in 2020 due to the COVID-19 pandemic.

Originally planned as the first circuit that would see players compete across the world in offline events, the ongoing COVID-19 pandemic made organizers shut down plans, with the SWT coming back as a hybrid competition that will mix online with potential in-person events down the line.

Let’s not keep you waiting and get straight into the details of the Smash World Tour 2021. 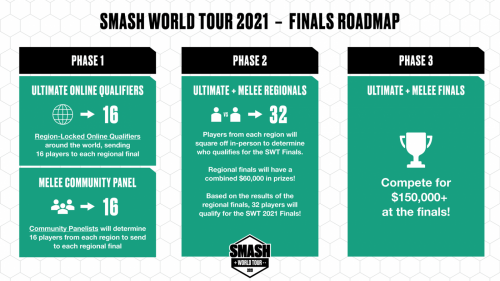 The Smash World Tour 2021 will kick off with a series of region-locked online qualifying events across the world for Smash Ultimate. The first of them happens in Mexico this upcoming 13th March, ending with Shine on 22nd May, an event for the North America northeast area.

For the Melee side of things, a specialized committee will pick the best 16 players from each region to send to the Regional Finals.

Starting 25th June with the Oceania Ultimate + Melee Regional Finals, these events are scheduled to happen in-person, however, it’s subject to travel restrictions that may arise due to the pandemic.

A total of 112 players in both Melee and Ultimate will compete in 16-man tournaments spread across a total of seven different regions, looking to earn a spot for the Smash World Tour Championships.

The Regional finals will start with a Group Stage phase splitting the 16-players into four groups.

According to their results in the Group Stage they’ll earn their seeding for the bracket:

How many qualify from each region? Take a look at the chart down below. 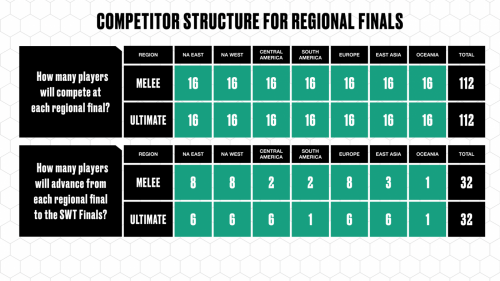 Scheduled to happen in December, the Finals will pit the 32 qualified players from both Melee and Ultimate into groups of four, using their results for seeding purposes.

The format is exactly the same as the Regional Finals, except there will be eigh groups of four instead.

The event itself is a double-elimination bracket that will crown the best players in the world for both Smash Ultimate and Melee.

There’s a lot of money on the line. Here’s the breakdown for prize pools involving Regional Finals for both Melee and Ultimate.

And here’s the breakdown for the Championships:

On top of this, there will be a “Variable Prize Pool” that is not set in stone and can help increase payouts. No details have been shared in regards to this.