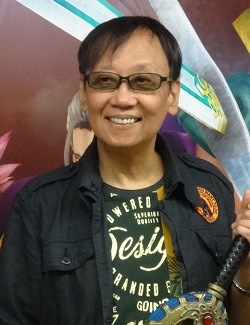 Creator of the legendary DRAGON QUEST® series, Yuji Horii, will be attending Anime Expo 2018, the largest anime convention in North America. He will be participating in autograph sessions at the SQUARE ENIX Booth throughout the weekend, at the following times:

The autograph tickets will be distributed at the DRAGON QUEST area of the SQUARE ENIX booth starting 10:00 a.m. of the day prior to each session. Lucky attendees who receive a ticket will be able to receive an autograph on an exclusive 8×10” signing card prepared by SQUARE ENIX and a photograph with the creator*.

* Fans may pose with Yuji Horii for one photograph. Signatures will be limited to a signing card prepared by SQUARE ENIX and he will not be signing personal items.

Throughout the weekend, attendees will be able to get hands on time with DRAGON QUEST XI: Echoes of an Elusive Age, prior to its release on September 4. The playable demo features two separate areas of the game: Cobblestone, where the Hero’s journey begins, and Gallopolis, where you can participate in horse racing, battle the menacing Slayer of the Sands, and more.

Attendees are also invited to obtain a variety of DRAGON QUEST XI giveaways, including t-shirts and double-sided posters, while supplies last.

Fans can also tune in for a special DRAGON QUEST XI livestream featuring Yuji Horii and the development team on Friday, July 6 at 7:00 p.m. Viewers will have the chance to ask questions live and win prizes throughout the stream at https://www.twitch.tv/squareenix.

More information on SQUARE ENIX’s activities at Anime Expo 2018 will be announced in the following week.

** An Anime Expo 2018 badge will be required to enter the Entertainment Hall.

DRAGON QUEST XI: Echoes of an Elusive Age is not yet rated. Please visit the Entertainment Software Rating Board (ESRB) website at www.esrb.org for more information about ratings.