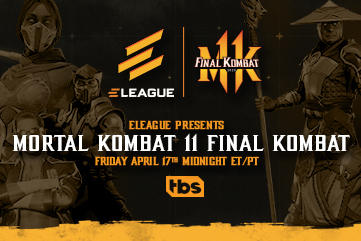 The two-hour special, ELEAGUE Presents Mortal Kombat 11 Final Kombat, will take fans on an all-access tour of Final Kombat 2020, which was held in early March at Chicago’s historic Park West theater. The show will offer an in-depth look at the competitors as they played their way toward the championship title for the Mortal Kombat 11 Pro Kompetition. Final Kombat 2020 saw the 16 most skilled Mortal Kombat 11 players from around the world compete in a double-elimination bracket with $100,000 in prize money on the line. The event saw a collection of fan-favorite FGC leaders participate, including former EVO winner and Esports Player of the Year, Dominique “SonicFox” McLean. McLean entered the tournament with a bold objective to win the finals using DC’s The Joker character, in a bid to follow up the Injustice 2 Pro Series 2018 title. A win would be McLean’s second world championship across two different NetherRealm fighting games using The Joker. Final Kombat also featured former ELEAGUE champion Ryan “Dragon” Walker and unsung hopeful Jarrad “NinjaKilla212” Gordon.
Tune in to the premiere of ELEAGUE Presents Mortal Kombat 11 Final Kombat, Friday, April 17, on TBS!