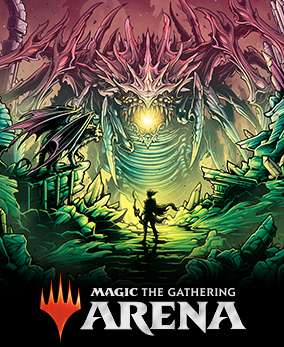 Wizards of the Coast has today announced the Magic: The Gathering Arena Open, a new type of competitive event for players of all skill levels to win significant rewards beyond gold, gems and booster packs. The Open has an unlimited prize pool, with any players who make it to Day 2 and achieve seven wins before losing three matches earning $2,000 – and there’s no limit to the number of winners.

The Arena Open was revealed in this week’s State of the Game and takes the format of a two-day online competitive event in Magic: The Gathering Arena with people aiming to get the real-world prizes. This effort is the latest one as part of Wizards of the Coast’s continued effort to allow players to compete from the safety of their homes.

All participants in the Arena Open will also receive special Godzilla Land cards to add to their collection.

The competition will be structured in two legs, with the first one starting May 30th at 4PM BST and costing 20,000 gold or 4,000 gems to enter. Any players that win seven Best-Of-One games before losing three will receive a prize pool of 2,000 gems, and qualify for Day 2.

The second day starts May 31st at 4PM BST with a Best-Of-Three format. Any players that win seven games before losing three will win $2,000, with no limit to the number of people who can win. Full details on the Arena Open and prize pools can be found here.

May’s State of the Game also revealed other additions coming to Magic: The Gathering Arena. The next update will introduce Historic Anthology III, adding 27 new cards to Historic; Historic Ranked, a permanent place to play the Historic format; and Cube Draft, which allows players to build decks pulling from 555 of the cards available in MTG Arena for a different kind of draft experience.

About Magic: The Gathering
Magic: The Gathering’s compelling characters, fantastic worlds, and deep strategic gameplay have entertained and delighted fans for more than 25 years. Fans can experience Magic through the tabletop trading card game, the new digital game Magic: The Gathering Arena, a New York Times bestselling novel, critically acclaimed comic book series, and professional esports league. With over 40 million fans to date, Magic is a worldwide phenomenon published in eleven languages in over 70 countries.