On your marks, ready, go! GAMEVIL announced the opening of pre-registration for Project CARS GO, the ultimate race simulation that will be released on mobile on March 23. Players who register on the official Project CARS GO website will receive a reward of 100 diamonds, the game’s virtual currency.

Since its big debut on PCs and consoles in 2015, the Project CARS license has sold 7 million copies worldwide. With its new “One Touch” control system perfectly suited to mobile media, Project CARS GO will rekindle the flame of intense auto racing on mobile. At the wheel of more than 50 fully customizable licensed cars, players will have to overcome many epic challenges on the world’s most famous circuits, to advance in the world hierarchy of drivers, and defeat their opponents in duel on straight lines in dragster mode.

Last October, a closed beta was held, during which players had the opportunity to taste the realistic graphics of the game, its authentic sound effects and its accessible customization features.

GAMEVIL aims to leverage its mobile video game expertise and the British racing skills of Slightly Mad Studios to deliver a unique driving experience on a mobile platform. 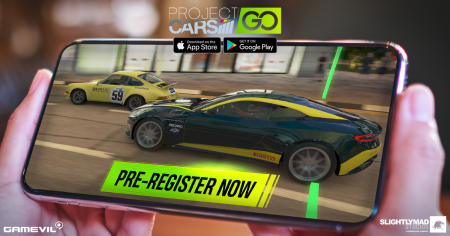