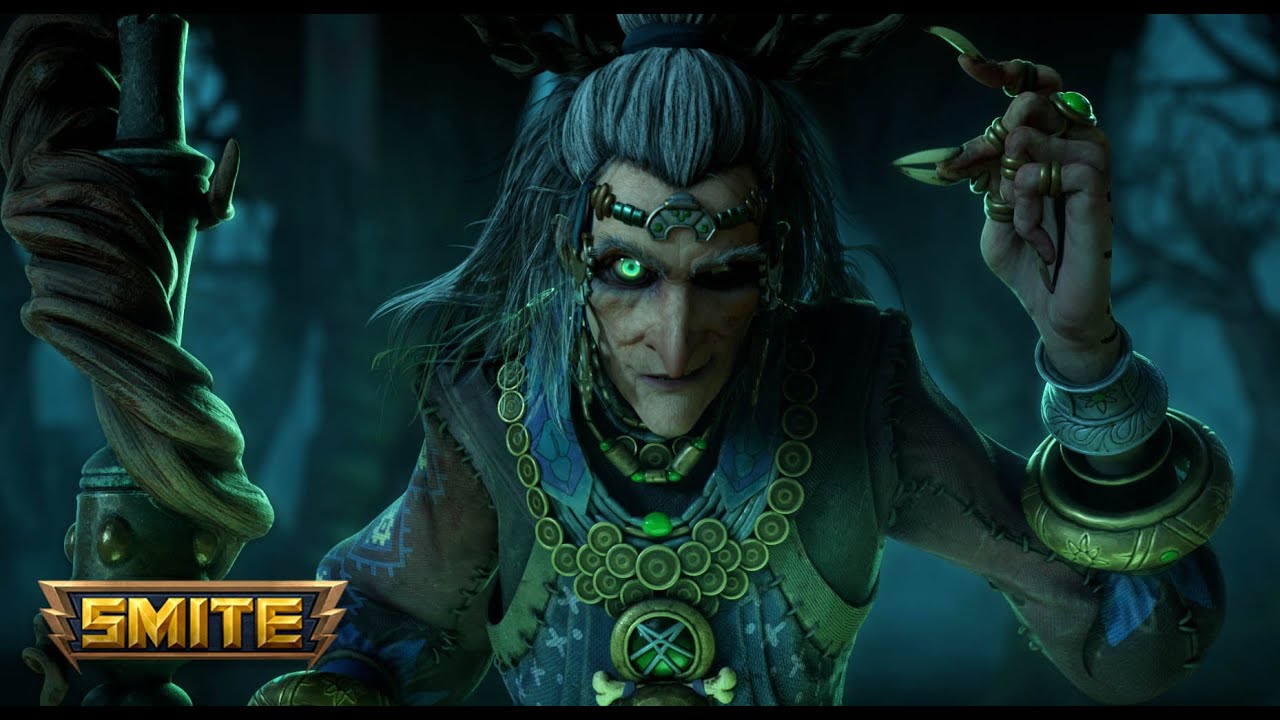 Baba Yaga becomes the 109th Goddess of SMITE in the “Witch of the Woods” update. As the most community-requested character, the Slavic Mage delivers through uniquely eerie looks and out-of-the-box, chaotic abilities.

Deep in the forest dwells a malevolent witch called Baba Yaga. In the historical lands of the Slavic pantheon, every child shudders at her name – even still today. Her tale resembles a founding myth: she is the original Witch of the Woods and her story paved the way to countless other legends since time immemorial. Despite Baba Yaga’s reclusion and notoriety, there are always some who come to seek her aid. For she is not diabolical so much as unpredictable, and she may agree to help and not to harm… Sometimes. Her logic is confounding to all, maybe even to herself.

In SMITE, Baba Yaga has both a visual identity and an ability kit very faithful to her legend. This malicious-looking elderly woman radiates an aura of unruly magic. She is complete with a crooked nose, a magical mortar and pestle, and most noticeably a self-aware house roaming around on blood-curdling chicken legs.

As a SMITE Mage, Baba Yaga can fire long-ranged damaging projectiles from her pestle. Players beware: it is unstable and the trajectory varies, but can always be anticipated with a glance at the HUD. The old witch also takes her sizeable mortar to battle. Inside she brews explosive potions that can be thrown instantly or stored for later use as offensive Consumable items – a brand new gameplay feature in SMITE.

Baba Yaga’s hut itself certainly stands out as well. Atop eldritch, gnarled chicken legs, it seems to have a personality of its own. As terrifying as the hut may look, for Baba Yaga it acts as an in-game home away from home, providing her with healing and other benefits.

Yet the mistress herself doesn’t fully control her cabin, which erratically paces around with delightfully unsettling animations. Only with her ultimate can Baba Yaga summon the hut to her and command it for a while, as she shelters inside and throws devastating Witchfire on her enemies.

SMITE players have been positively united around the desire to enjoy Baba Yaga as a playable Goddess, to the point where the witch was the most requested deity for 2020.

Baba Yaga is certainly one of the most prominent characters in Slavic folklore,” says Svetlana Lisik, Russian Translation & Community Specialist at Hi-Rez Studios. “It’s amazing how excited about Baba Yaga’s release all the community is, and especially Russian- speaking fans. I’m glad to see that the SMITE Goddess they anticipated the most is now living up to their highest expectations!”

All details on Baba Yaga and the Witch of the Woods update are in the patch notes:
https://www.smitegame.com/news/witch-of-the-woods-7-4-update-notes/