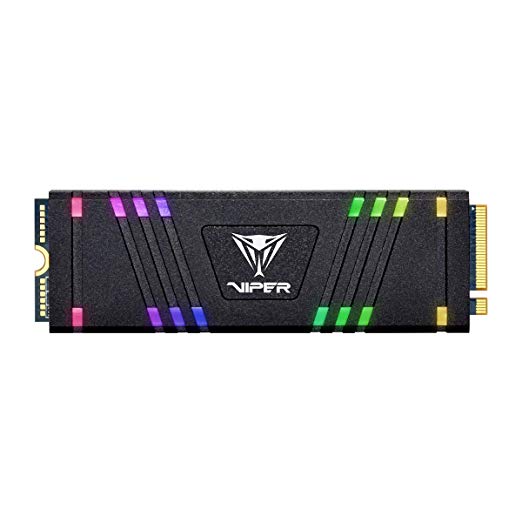 VIPER GAMING by PATRIO announced the official launch of the VPR100. The new m.2 2280 PCIe Gen3 x4 RGB solid state drive offers capacities available from 256GB up to 2TB. The VPR100 is targeted to deliver uncompromising speed and performance for intense gaming, overclocking, video content creating, and 3D rendering. Built with the latest Phison E12 PCIe Gen3 x4 NVMe controller to bring out lightning-fast sequential Read and Write speeds and OS start-up time. The VPR100 utilizes a low-profile aluminum heatshield that not only dissipates performance-robbing heat, but also brilliantly highlights the on-board LEDs making the VPR100 an eye-catching centerpiece of any PC build. The VPR100 is the first PCIe m.2 SSD that offers users to customize their RGB illumination through the user-friendly VIPER RGB app 2.1 application. The software equipped with up to five customizable lighting profiles along with eight pre-programmed RGB lighting patterns, including viper, heartbeat, breathing, and more. The user-friendly interface makes it easy for the user to select from the entire RGB spectrum and lighting patterns to match their gaming setup.

SSD Read and Write speeds are essential metrics when choosing a performance-based NVMe m.2 SSD especially when the system is subjected to heavy workloads like intensive gaming or UHD video editing. The VPR100 offers better performance over traditional non-PCIe storage products and is considerably more compact. The VPR100 delivers exceptional sequential Read and Write performance with up to 3,300 MB/s Read speed on 1TB/2TB model and 2,900MB/s Write speed. The drive provides 4K random-read IOPs up to 700K and random-write IOPs up to 650K on 1TB/2TB model for exceptional throughput. Performance is enhanced thanks to the structure of the Intelligent SLC (Single Level Cell) caching algorithm, ensuring that data is handled quick and efficient.

The VPR100 is built with the best-in-class components on a 10-layer PCB board for ensuring the best signal integration and excellent stability and an External Thermal Sensor to monitor internal temperatures of the drive and prevent the risk of overheating. It aims to reduce performance degradation and extends the life of the drive. The VPR100 is built with a military-grade aluminum heatshield with a unique alloy design to provide excellent thermal dissipation.

Availability
The VPR100 m.2 RGB SSD is available at major retailers including Amazon.