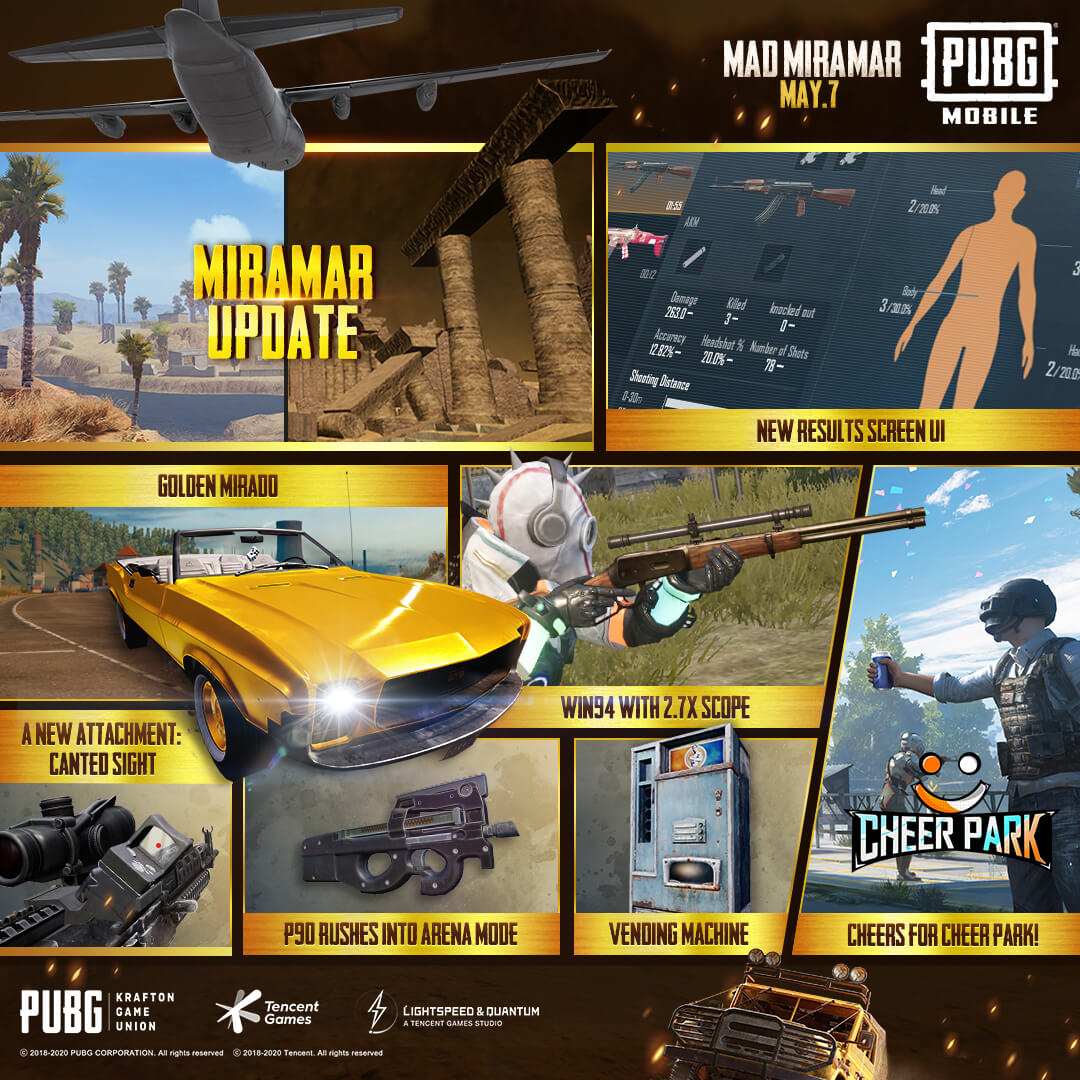 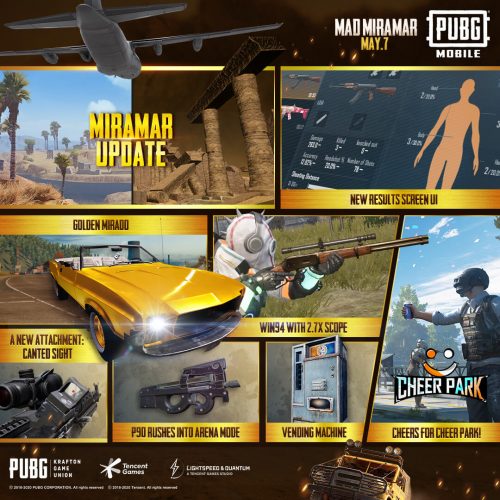 Several weeks ago, strange symbols began to appear in official PUBG MOBILE Twitter and Instagram images, which community members cleverly decoded as “New Maps.” A growing sandstorm has enveloped the updated Miramar map as witnessed, while an all-new landscape has been unveiled. In addition to fresh housing areas, roads and resources, an Oasis and Urban ruins have been added for additional landing spot strategy. Similarly, players can test their driving skills in the new race track with the new vehicle Golden Mirado, which only one will spawn on the map. Players can also quickly collect Energy Drinks and Painkillers at added Vending Machines.

Besides the most noticeable changes as above, the new updates of Miramar also include:

The massive 0.18.0 content update delivers a wave of other additions such as:

Royale Pass Season 13 (available on May 13 as announced)
In Season 13’s “Toy Playground” toy-themed Royale Pass, players have the choice between Level 50 Captain Hawk and Level 50 Fire Ranger. The new Royale Pass includes a Level 100 Ultra Defender and Puppet Agent outfit, which offers three forms to mix and match. Other minor bugs and tutorial guides have also been improved for Royale Pass Season 13.

Guncraft Finishes (coming soon)
Players can now customize the color, patterns and emblems of their weapons after obtaining them. With the new Emblem editor, players can overlap basic images and shapes to create completely custom Emblems. Guncraft materials can be obtained from the wheel, and some materials can be purchased directly. Graffiti can also be exchanged for Guncraft stickers and applied to weapons as a finish.

Cheer Park
In this new social area, up to 20 players can interact in real time, with multiple features from the basic Training Grounds. In the Cheer Park, players can view information from other players, interact with Emotes, add friends and even roast chicken dinners together. Players can also hone their skills by teaming up for various game modes, visit the Shooting Range, or play the new Duel and Hunt Game modes.

New Results Screen UI
In the Classic Mode game type, the Results screen has been upgraded with a new “Detailed Results” screen. Players can now inspect their match statistics and compare them with stats from friends in the same tier to further analyze gameplay. There are also now five grading criteria in the Results screen to change the rating system and rating display.

AG Currency
Beginning today, all Silver reward will be replaced with the all-new AG (AceGold) currency, not including events that began before the update. The price of most items purchasable with UC in the Shop are changed to AG. Similarly, Royale Pass UC rewards now offer either 30 UC or 400 AG rewards at each corresponding rank. UC can now also be used to make up small differences when players do not have enough AG for crates.

Additional miscellaneous improvements are also part of the 0.18.0 update: