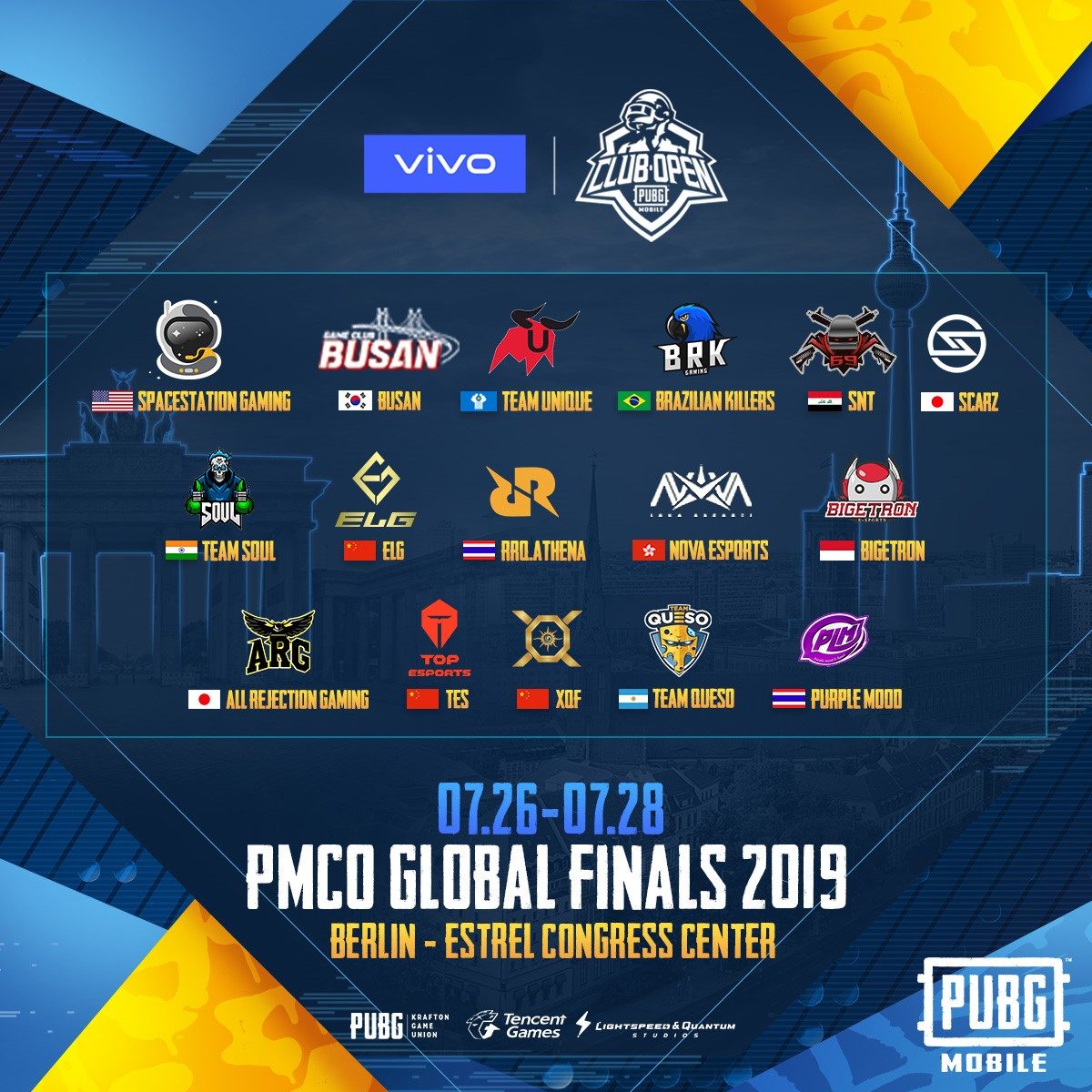 After months of regional qualifiers, breathtaking matches and countless chicken dinners, the 16 teams for the PUBG MOBILE Club Open 2019 Global Finals are set. After the last round of preliminary matches, PUBG MOBILE revealed today the full list teams set to drop into the finals, including five teams who secured their spot this past weekend at the PMCO Prelims. Beginning Friday, July 26 to Sunday, July 28, the 16 qualifying teams will converge for the largest competition in the history of mobile esports.

Leading global technology company, Vivo, is the official title sponsor of the PMCO 2019, providing smartphones to empower players’ conquest at the competition with ultra-smooth gaming experience. The Fall Split is planned for later this year.

After the 12 matches in the two days of PMCO Prelims, team Purple Mood, XQF, Team Queso, Top Esports, All Rejection Gaming have finally battled their way out and earned the last five tickets to the PMCO GLOBAL FINALS in next weekend.

Read below for highlights from the two days of breathtaking matches:

The team XQF from China displayed super strong performance as expected in Day One, who managed to take 3 chicken dinners out of the 6 matches, leaving the rest 15 teams behind with a total 181 score. The Thailand squad Purple Mood arrived in second place with 148 points, followed by the NOVA Monster Shield from Taipei, China and the Japan Squad All Rejection Gaming. The four Asian teams were leading the Day One scoreboard.

In the first match of Day Two, the team XQF was eliminated directly after they jumped into the same building with two other squads and ranked 16th with a score of almost zero. In the meantime, Purple Mood managed to take the chicken dinner and kept their strong performance by turning the tables and achieving the first position on leaderboard after the end of Day Two. The Argentina squad Team Queso also surprised everyone with their strategic gameplay and stable performance and ranked third in the end.

In the last circle of the last match, only one player was left for each of the Team Indian Tigers, XQF and Top Esports. Paraboy from XQF initiated the fight but was stopped by Top Esports. “Go Prince, go Prince…” Indian audiences flooded the chat cheering for their last man standing, Prince managed to get the kill and the chicken dinner, earning hearts of spectating fans. But sadly, they couldn’t make it to the Top 5 by a minimal margin of 10 points. Players from Team Queso and All Rejection Gaming hugged each other with tears as they were so happy that they finally made it to the GLOBAL FINALS. 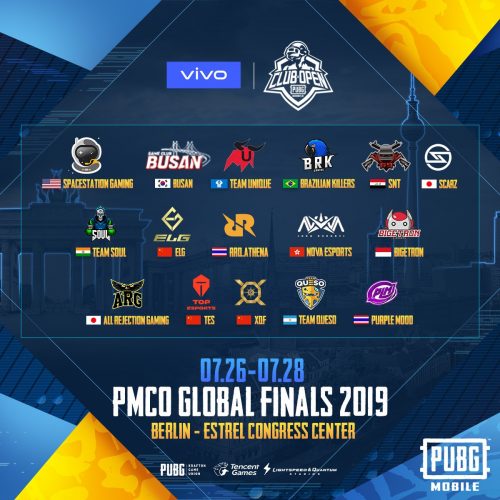 The 16 teams set to represent their respective countries and regions in the finals include:

“In just over one year, PUBG MOBILE has become a forerunner in the mobile esports universe,” says said James Yang, Director of PUBG MOBILE Global Esports at Tencent Games. “This weekend’s finals competition is a result of tireless community participation and engagement, and sets the stage for the largest competition in the history of mobile esports next week, which will be fully viewable in Spidercam’s 360 degree immersive viewing experience.”

This year, the PUBG MOBILE Club Open 2019 Global Finals will allow users to utilize the famous Spidercam system. Spectators can witness all the action from four unique perspectives that carefully capture every intense moment of the players on stage. Community members are invited to tune in for the official live broadcast on the PUBG MOBILE Esports YouTube channel here.

As the special event in the first day of the PUBG MOBILE Club Open 2019 Global Finals on Friday, July 26, nine superstars from different regions stand out from the TEAM UP campaign through 10 days voting, will team up as the ultimate team and compete in a show match, which is rarely seen in mobile esports. They are celebrities and influencers chosen by players to represent their respective regions, including Giannis Antetokounmpo, one of the most talented basketball players and 2018-19 NBA Most Valuable Player.

International superstar Alan Walker will also join for both the show match and an exclusive live performance, where he will debut his new song collaborating with PUBG MOBILE.

The PUBG MOBILE Club Open 2019 Global Finals will be hosted live from Friday, July 26 to Sunday, July 28 at the Estrel Congress Center in Berlin. Over 90% of all on-site tickets are sold out, but players who want to witness the action live can still purchase the last remaining tickets here.

PUBG MOBILE is developed by Tencent Games and PUBG Corporation and based on PLAYERUNKNOWN’S BATTLEGROUNDS, the original PC and Xbox One gaming phenomenon that took the world of interactive entertainment by storm in 2017. Up to 100 players parachute onto a remote island to do battle in a winner-takes-all showdown. Players must locate and scavenge their own weapons, vehicles and supplies, and defeat every player in a visually and tactically rich battleground that forces players into a shrinking play zone.