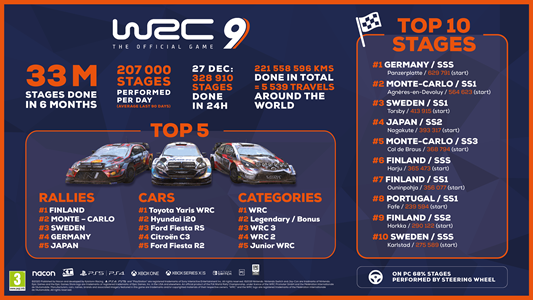 As the next chapter of the official video game of the FIA World Rally Championship is about to start, NACON and development studio KT Racing are proud to provide a recap of WRC 9 and the various events organized for the official rally simulator. NACON who has become a key player in racing games publishing over the last few years will make additional surprises and announcements in the upcoming days.

Over the last six months, over 33 million special stages have been raced by WRC 9 players. That’s a total of 221 million kilometers, or going around the world 5,500 times! 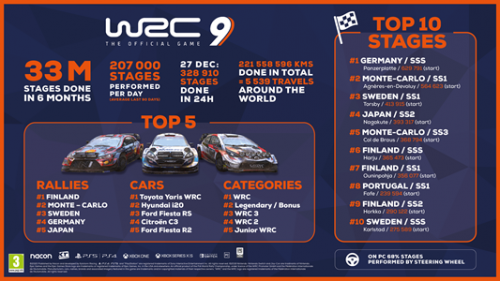 The Nordic countries seem to inspire drivers, as Finland and Sweden occupied the top and third positions in the rankings of the most played rallies. We should also highlight the high position of Rally Japan, which was fifth in the rankings. This rally, which had not been included in the Championship since 2011, was one of the new rallies included in WRC 9.

Of particular note is that racing wheels were used for 68% of the special stages raced on the PC, which speaks about the game’s immersion. WRC 9 is definitely the ultimate motorsports simulator for thrill-seeking fans! Players using a controller on PlayStation®5 were also treated to an immersive experience thanks to the work done by KT Racing to make use of the haptic features of the DualSenseTM controller, which was also roundly praised by the press.

eSports has been central to the WRC’s official game since 2016. In partnership with Toyota GAZOO Racing, the sixth season of the eSports WRC Championship is in full swing! The first five rounds have all been won by Sami-Joe05, who has also set a new record for the competition. The young Lebanese player, who is also a go-kart champion, has already been voted the season’s Most Valuable Player (MVP) in 2020. He leads Nexl, the French world champion who won in both 2017 and 2019. While the competition was tight between the two drivers in the first four rounds (0.110s difference in Argentina after 12m 42s of racing in three consecutive special stages!), Sami-Joe05 ultimately widened the gap in the fifth round in New Zealand with nearly 5 seconds and a 38-point lead over his rival. But there are still nine races and lots of chances for a complete reversal of fortunes! As a reminder, the winner will win a Toyota GR Yaris.

WRC 9 is more than just a motorsports simulator: it is also a springboard for the careers of future rally drivers through the FIA Rally Star program. Open to all players between the ages of 17 and 26, this program gives the most promising drivers the opportunity to take part in the FIA’s training and coaching program.

Over 75,000 special stages have been contested, and the first three drivers to qualify for intercontinental finals have been identified. Like the eSports competition, FIA Rally Star on WRC 9 is a grueling battle that goes down to the wire: Alejandro “Billy Cherokee” Aroca (Spain, qualified in the first phase) was only 0.018s ahead of Luc Fournier (France, qualified in the second phase)!
Ultimately, seven finalists, including one female driver, will be able to start their international driving career before trying to move up to the FIA Junior WRC and thus turning their virtual experience into reality!

With WRC 9, the passionate developers of the French studio KT Racing have pulled out all the stops to once again meet the high expectations of rally fans looking for tougher challenges and heightened realism. With an enhanced career mode and many technical improvements, players are thrust into the heart of the new FIA World Rally Championship season with all the highlights of the yearly calendar and much more:

WRC 9 is available on Nintendo Switch™, Xbox One, Xbox Series X|S, PlayStation®4, PlayStation®5 and PC via the Epic Games Store.