Com2uS, the creators of the fantasy RPG franchise Summoners War celebrates the seventh anniversary of Summoners War: Sky Arena, revealing special in-game events and rewards for players to enjoy. In honor of the anniversary, Com2uS also announced several major milestones for the company’s flagship title including the game’s popularity which has generated a total of 2.6 billion log-ins and earned the rank at one point as the number one game with the highest revenue in 90 countries.

During the past seven years more than 100 million players have enjoyed Sky Arena which has generated an average daily revenue of over $900K per day, among an average of 1 million daily active players. The franchise continues to expand this year with the recent launches of the real-time battle strategy mobile game Summoners War: Lost Centuria, the Summoners War: Legacy comic book series and the upcoming esports events Summoners War World Championship 2021 and Lost Centuria World Showdown.

To celebrate the seventh anniversary of Summoners War, Sky Arena players will have the opportunity to receive 100 gifts as they play through a variety of special in-game events and earn points each time they log in. Additionally, players can aid in the conservation of marine life through the Summoners War: Sky Arena “Pearls of Love” event, with proceeds benefiting seven endangered ocean animals in collaboration with the Korea Green Foundation. 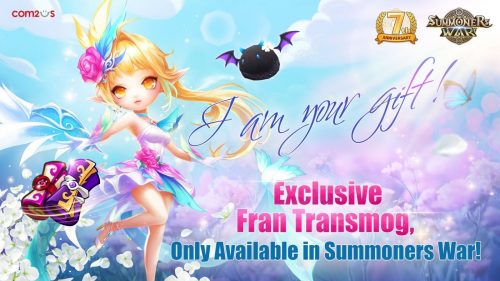