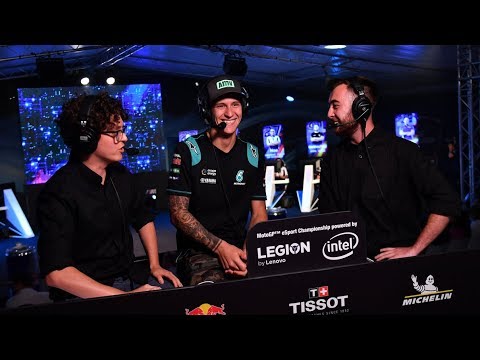 Cristianmm17 staked his claim to become the 2019 MotoGP™ eSport Champion by putting in a near flawless performance at a thrilling first round of the Global Series to take a healthy 12 point championship lead to round two at Aragon.

In a star-studded double-header, which saw the 12 Global Series finalists take on Mugello and the Red Bull Ring for races one and two, MotoGP™ stars Jack Miller and Fabio Quartararo were on hand to offer advice and opinion on the events on track.

Miller was interviewed on stage by presenters Gavin Emmett and Amy Dargan as he provided typically humorous tips to the finalists prior to race one as rookie sensation Quartararo joined Matt Dunn and Jack Appleyard for commentary duties during race two.

The first race was a classic two-horse race between Ducati Team’s AndrewZh and Team Suzuki ECSTAR’s Cristianmm17, the gamers that qualified first and second on the grid in Thursday evening’s qualifying session. The chasing pack couldn’t get close as the pair reeled off a succession of fast, consistent times. In the face of unrelenting pressure, AndrewZh held his nerve to take the chequered flag 0.4 seconds ahead.

The fight for third was intense at first, with reigning eSport Champion trastevere73 making swift progress from his qualifying position on the second row. Despite his best efforts, the Monster Energy Yamaha MotoGP rider couldn’t bridge the gap to the leaders. He would ultimately collect solid points for third.

The second was as exciting as it was dramatic. After taking the lead on lap 1 at turn 3, Cristianmm17 produced a stunning performance, dominating proceedings to win by a comfortable 4 seconds.

With the Spaniard clear at the front, it was left to Juan_nh16, Mereja and trastevere73 to provide the entertainment in an all action fight for second. There was controversy on lap 2 when race 1 winner AndrewZh and adrianDP26 collided at turn 4, with the Ducati man crashing out. It was a move that was investigated by Race Direction, who eventually concluded no punishment was necessary.

The result puts Cristianmm17 to the head of the championship on 45 points, 12 ahead of AndrewZh and 16 clear of Juan_nh16. Trastevere73 has his work cut out with the Italian sitting fourth, 16 points behind.

The 12 finalists have just five days to catch their breath before the second round of three in the Global Series gets underway at the #AragonGP.