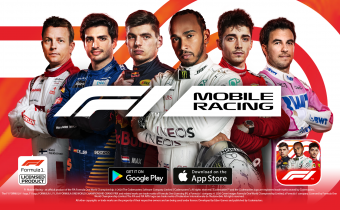 Codemasters® and Eden Games announced the arrival of the F1® 2020 season to F1® Mobile Racing, an official mobile game of the FIA FORMULA ONE WORLD CHAMPIONSHIP™. With its next update, scheduled for early May, players will get access to the current line-up of teams, cars, drivers, helmets and circuits, including the brand-new Circuit Zandvoort. Hanoi Circuit will follow in a separate update at the end of May as part of a street circuit in-game event.

F1® Mobile Racing Update 12 features all the 2020 regulation-designed cars complete with official team sponsors and official driver helmets. It allows players to compete against the greatest drivers on the planet including Lewis Hamilton, Max Verstappen and Charles Leclerc.

Free to download and play, F1® Mobile Racing allows players to create their F1® car complete with colour scheme, livery and performance upgrades or use the official cars of the 2020 FIA FORMULA ONE WORLD CHAMPIONSHIP™. Take to the grid and race against official F1® teams and other racers in time-limited Grand Prix™ Events for big rewards and combine scores over each event to rank on global leader boards. Players can also take on other competitors online in one-on-one Duels to move up the global Leagues and complete countless Challenges.

The year 2020 marks a celebration with Formula 1® looking back at 70 years of the FIA FORMULA ONE WORLD CHAMPIONSHIP™, and F1® Mobile Racing will host an in-game 70th Anniversary Championship. Starting in May, players can participate in a one-off GP Event at five of the iconic circuits from the 1950 Championship, competing to earn special 70th Anniversary in-game prizes.

Since its launch in October 2018, F1® Mobile Racing has established itself as the must-have free-to-play mobile companion. To date, the game has launched in 155 countries and has over 18 million downloads. With a focus on fast-paced, one-lap, PvP races on full circuits, F1® Mobile Racing allows players to instantly jump into races and compete in weekend challenges and cross-play multiplayer battles.

“We know our players will be excited by the first major 2020 update of the year and there is still a lot more to come,” said Vincent Meulle, Executive Producer at Codemasters. “We are excited to launch Circuit Zandvoort, and later in the month Hanoi Circuit, but we don’t stop there and have big surprises and features coming later in the season.

Our players want the most authentic experience possible on their mobile devices and with the new 2020 season update F1® Mobile Racing continues to deliver the action and excitement they crave.”